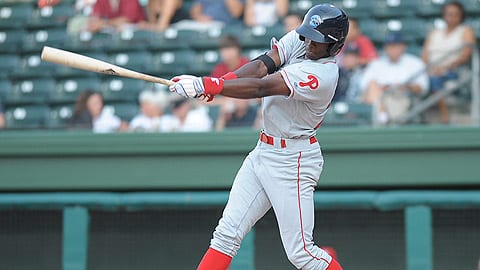 Recently, I chatted with Lakewood Blueclaws’ outfielder Jiwan James. Jiwan was drafted in the 2007 Amateur Draft in the 22nd round by the Philadelphia Phillies. He has been in the organization since then. Here’s a short Q&A session between Jiwan and me.

Danielle: I've noted that you began your career as a pitcher, but later began fielding right and center field, any specific reason why you changed positions?

Jiwan: Arm injury was the main reason. I didn't mind pitching at all, I felt like that's what the Phillies wanted me to do so I was all for it. I ended up having a stress reaction in my humorous, that just kept re-occuring and that's when I decided to make the switch.

Danielle: There is no record of you playing any position in 2008, were you injured? If so, could that effect your future?

Jiwan: I missed all of '08 with the arm injury. There isn't as much stress on my arm playing a position as to pitching, so that's behind me now.

Danielle: Since 2007, you've been playing for the Phillies Organization, would you have that any other way?

Jiwan: NOPE!!! The "Phillie Way" is all I know, I couldn't imagine playing with someone else.

Danielle: How did it feel winning the SAL Championship in 2010?

Jiwan: It was a "GR-R-REAT"(Tony the Tiger) feeling…I've never won a ring before, so it was pretty exciting being in the middle of all of it. Our goal when we left spring training was to repeat as SAL leagues champions. Once that final out was made it was like. Goal accomplished, now it's party time…Lol

Danielle: Do you think having that title will benefit you in anyway in years to come?

Jiwan: I'd like to think so. I know how much hard work we put in day in and day out to accomplish our goal. So each year, you're only going to work harder so you have that same feeling of winning another title.

Danielle: Do you share any brotherly relationships with any of your teammate's? I know how you and Jarred Cosart call each other "Boob".

Jiwan: Hewitt! Him and I have been roommates since extended spring 09. So there's stuff that him and I know about each other that no one else knows. We can just look at each other and tell if something's wrong or give each other a little head nod and be on the same page.

Danielle: Where do you see yourself in 3 years?

Jiwan: Trying to get my feet wet in the Major Leagues with someone.

Danielle: If you had never took an interest in baseball in the past, where do you think you would be now?

Jiwan: Either training for the NFL Combine or trying to reach March Madness. Every time I go home, one of my High School football coaches tell me "I'm sure Florida State will still take you" (football). So I'm guessing I would've gone there on a football scholarship and walked on to the basketball team.

Thanks to Jiwan for taking the time to answer these questions, you can follow him on Twitter @Jiwan23