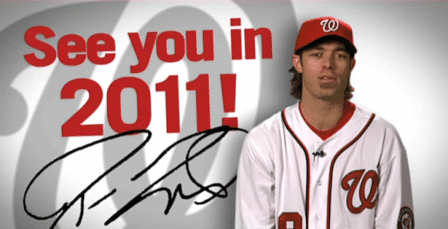 While I think he’s deserving of a standing ovation when he comes back home, Jayson Werth needs to finally move on. He wasn’t traded, or released; he was offered a ridiculous amount of money from a bad team and he took the bait.Who can blame him really? A lot of people would be satisfied with winning a World Series ring in 2008, enjoying a few years of being at the top of the baseball world, and then cashing in to spend seven years in the purgatory that is the Washington Nationals for a handsome reward.

Just yesterday, Werth was quoted as saying the following:

Am I the only one who thinks he can ball up some $100 bills and use them as tissues to dry his eye? At what point is he going to say that whatever happened is done and that he is ready to move forward with his new team? Werth is starting to sound like a scorned lover who just can’t let go. How long will it be until he’s calling Ruben at 3 am, sobbing into the phone about how much he misses his old team and city?

If it makes you feel any better, Jayson, then you should know that your team is actually on the rise. If they keep going after solid players in the offseason and mix them with young talent like Stephen Strasburg and Bryce Harper, then your team could be a contender in a couple years. But for now, if you want to see a winner, you’ll have to look just north.

Don’t be sad though; we’ll see you real soon. Starting April 12, Phillies fans will take over your home park down in Washington. You’ll be able to look forward to this for the next seven years. You took the money and ran, Jayson.

We won’t hold it against you, just as long as you move on. If you feel the urge to speak about how it’s the Phillies fault that you’re wearing that ugly new uniform with the goofy looking “W” on it, then please think again. You’re a World Series hero in this town, but right now you’re playing with the enemy.

You made your bed out of cash, now lay in it. We’ll send you a postcard from the World Series.