Happy Birthday to the Voice of the Phillies, Harry Kalas 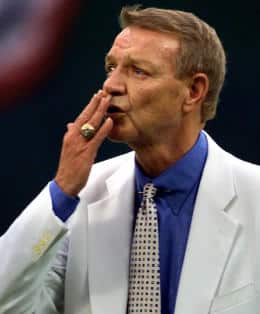 Today would have been Harry Kalas’ 75th birthday. Wherever you are today, be sure to stop what you’re doing for a second and remember how much of an impact Harry had on all of our lives. He was, and will always be, the voice of our Fightin’ Phils.

I’ll never forget where I was on the day we lost Harry. I was at work and saw a text message on my phone that Harry had collapsed in the radio booth and was being rushed to the hospital. I was worried, but thought he would pull through and be back in the booth soon enough. I couldn’t imagine listening to Phillies games, something that is such an important part of my life, and not have Harry be the one to narrate them for me.

I received a follow up text message maybe 15 minutes later saying Harry had passed. As tears filled my eyes, I did everything I could to make it through the rest of the day and get home to my TV, where I watched the coverage of his life and death on the local news, and on Comcast.

Harry was there at the highs and lows of our lives. He was always the comforting voice behind watching the Phillies team that we all love. To care for someone as much as most of us did, and in my case to never have even had the chance to meet him in person, says just how special of a person he was.

Harry the K, you are the man. Happy Birthday.