Luis Castillo and the “Doomed to Mediocrity” Mets: If Cut, Do Phillies Grab Him? 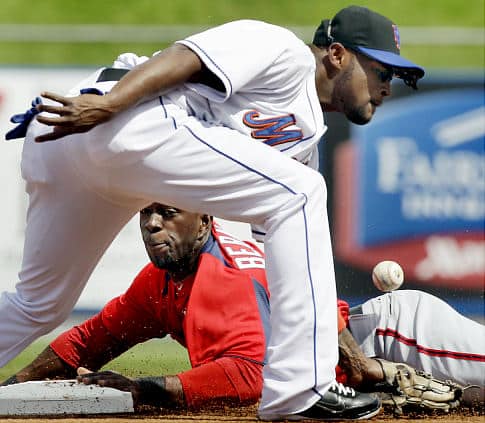 In this piece on FoxSports.com, Jon Morosi writes that the New York Mets are "Doomed to Mediocrity" and it "pretty much does not matter" who plays second base.

"Mid-March predictions often look foolish in retrospect, but here’s one I’m confident will stand up: The success (or failure, more likely) of the Mets in 2011 will have very little to do with whether Castillo sticks around for another six months of jeering at Citi Field.

"It’s simple: The Mets are doomed to yet another sub-par season because they lack the impact talent to compete in the National League East. One veteran scout, in fact, believes they will finish last in the division."

Luis Castillo is so unpopular among Mets fans that he is even getting booed in Spring Training games.   Some reports suggest Mets Manager Terry Collins may be lobbying for Castillo's release as he is ready to declare the virtually unknown Luis Hernandez the starter at second base.

Chase Utley will not likely start the season for the Phillies, and the Phillies options to fill in for Utley are particularly worrysome, given the recent minor injury to Placido Polanco and recent injuries to Jimmy Rollins.   Should Wilson Valdez start at second base, there may not be a strong option for shortstop or third base.

Castillo would be placed on release waivers, and teams likely will not claim Castillo and his $6 million salary.  He would become a free agent and the team that signs him would only be responsible for the major-league minimum salary.

Castillo has not been the same player he was at his peak for a couple years, but if he is healthy, he may be an adequate stop-gap at second base.  If he fails, the Phillies could easily release him themselves, and bring up one of their minor-league signings, such as Josh Barfield.

I say give Castillo a shot, if and when he is released.  Low cost, potentially high reward.