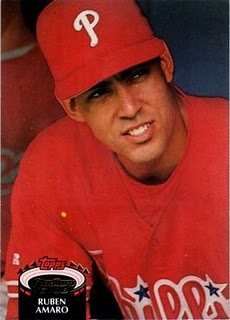 Amaro was pretty direct, stating any rumors of a trade are "B.S.", and  "I have no money to play with.  Our payroll is going to be over $160 million or so and I’m tapped out, my friend.  Maxed out.”

Of course, as Murphy points out, that does not mean that the Phillies won't clear money in a trade.

If Chase Utley is indeed out for the season, as Paul Hagen pointed out the other day, they may collect some insurance money on the contract.

In other Amaro news, on Comcast Sportsnet's Phillies Focus, Phillies General Manager Ruben Amaro Jr. held strong to his contention that trading Cliff Lee was the right move, despite plenty of criticism for the move.

Amaro indicated that he felt it was important to have one ace locked up, and viewed the trade as one for one (the usual lines).

How did he feel about the constant criticism for the Lee trade?

"Personally it bothers you, but professionally it didn't, because it was the right thing at the right time".

"Time and circumstances dictate…We got into a situation with the support of the fans…to be able to bring him back…The proof is in the pudding.  We have three young players… now we have all of them".

Was there at any time he wished that he had never traded Lee?

"I will say that had we not had 97 wins and been one of the best teams in the league… In the middle of the season I thought it might be nice to have Cliff on the club, when we had some injuries… ultimately I thought we still had the club to win the World Series."

So, if anyone thought that re-signing Lee in the offseason would lead Amaro to admit a mistake, it is not going to happen.

It's okay, Ruben, I forgive you now.

The program also took a look at Amaro's transition from the field to the front office, including his odd path from being released by Toronto's AAA team, to rejoining the Phillies as a player, and his time working with Ed Wade and Pat Gillick.