It's Sunday, and the first afternoon of Spring is a great opportunity to see which Phillies slideshows are on the internet today. 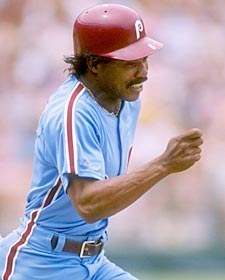 Weak Rankings: Philadelphia Phillies Worst Players at Each Position Since 1980

So, what do a Phillies Cy Young Winner, Rookie of the Year, and three other All-Stars have in common?  Yep – they are all the worst.

On Rickey Otero: "This guy was so forgettable that there wasn't even a Phillies photo available on Bleacher Report."   Umm, maybe because you don't know how to spell his name, nothing came up.

On picking Cy-Young Award winning closer Steve Bedrosian as the worst: "TOTALLY forgot about Wayne Gomes AND, for that matter, Heathcliffe Slocumb. I actually felt bad putting Bedrosian in there, but couldn't think of a closer that wasn't pretty successful."  Was this writer even alive for Kent Bottenfield, Mark Leiter, Doug Jones, or Joe Boever "the Saver"?

For Starting Pitcher, Phillies reliever Mike Maddux got an honorable mention for his occasional spot starts, and Randy Lerch, who made Phillies Nation's Top 100 Phillies of All-Time list.

On Picking Rookie of the Year Juan Samuel as worst Phillies 2B of all time:

"Sure, Samuel put up some decent numbers.  He was second in the NL MVP voting in 1987.  What I will say about Samuel is that he struck out, a lot! "

For the poll, I selected "We're Effed" for how I feel about the 2011 Phillies.

So why do I get the feeling that general manager Ruben Amaro and manager Charlie Manuel are smiling?

Today’s word, children, is a big one that any Philadelphia sports fan knows all too well, and that word is:

I would quote what he says, but with already superfluous quotes that would fit very nicely on the Blog of Unnecessary quotes, I figured I would skip them.

Matt Rizzotti, Justin DeFratus, and Tyson Gillies, who were not found on Baseball America's list, can be found on this slideshow.  De Fratus, according to the slideshow, is the Phillies top pitching prospect.

Finally, a screen capture of the top two Phillies stories:

Apparently, they are short on pictures, too.