What Brad Lidge’s Latest Injury Means to the Phillies 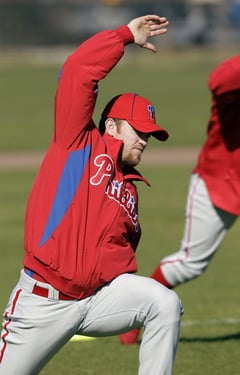 The good news keeps on pouring in from Clearwater.

The latest Phillies player to get bit by the always annoying injury bug is Brad Lidge. According to philly.com, Lidge did not travel with the team this morning to Kissimmee, Florida for their 1:05 spring training game against the Astros. Apparently the reason for him staying behind is that he is experiencing “soreness in his biceps tendon” which he has since updated to be “biceps tendinitis.” Before the whole Chase Utley soreness and now tendinitis injury talk, I would have taken this news more lightly. However, with the way the Phillies have handled injuries through the years, most recently Utley’s, these words might as well read “dismemberment.”

Either way, this is another injury that should have us worried. This team is getting older and older. I fear that this season is going to call for too much relying on our Phour Aces. Now, not only do the starting pitchers have to pitch extra well, since our lineup doesn’t appear to be as potent as years past, but now they may need to be stretched later in games with this news.

This is just another example of how badly this team needs to get younger. That is one of the reasons why so much is riding on Domonic Brown’s comeback after his broken hand is all healed up. He is the centerpiece of the Phillies’ plan to turnover the talent of the team to the next group without suffering from a great downfall, which would include missing the playoffs (I forget; what does that feel like?)

That leads me to this. As much as I would like the Phillies to trade for super utility infielder Michael Young from the Rangers to fill in for Utley, the last thing in the world that this team needs right now is another aging slugger in his mid-30’s with a huge contract. It’s kind of sad when you think about it. This group of guys brought us a World Series title, and now it appears that most of them are on the decline.

If Lidge’s injury continues to be an issue, then the ball will most likely be handed to Ryan Madson for 9th inning save opportunities. This may be a good chance to see what Mad-dog can do with the pressure of the 9th inning again. He hasn’t had the best track record with closing out games, as we know. But if he wants a new contract as our closer starting next year, then it looks like he may have an audition sooner than planned.