What Would Have to Happen for the Phillies to Acquire Michael Young? 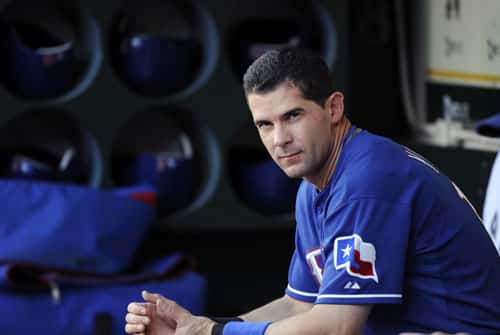 So, once again reports surfaced connecting the Philadelphia Phillies to Texas Rangers' infielder Michael Young.   What would it take for the Phillies to acquire him?

Here is what we know:

1) The Texas Rangers have already displaced their all-star infielder from second base and shortstop in recent years.  Signing a new third baseman, Young is displaced again, this time to a DH/super utility role.   He is not happy, and the Rangers have indicated they would be willing to move Michael Young. Young requested a trade.

2) The Phillies are in need of a second baseman, and have some serious shoes to fill, given the serious injury to Chase Utley

3) The Phillies have maxed out their payroll.  They went above and beyond to sign free-agent pitcher Cliff Lee, and they have reached their absolute limit, if they have already gone above that.

4) The Rangers are willing to eat half of the remaining $48 million on Michael Young's contract provided they get top talent in return.

5) The more serious Utley's injury appears, the Phillies are more likely to "make a pitch" for Michael Young, having already "kicked the tires" last month.

Would there be a match?   Paul Hagen offered his analysis a couple weeks ago, but with the recent developments, it could look like this:

1) The Rangers do indeed eat half of Michael Young's contract.  However, of that half, the Rangers would have to eat most of 2011's salary, in a breakdown such as this:

To the Rangers, who seem content to keep Young anyway, could absorb the $13.5 million this season, since his full salary is already in the budget.

2) The Rangers take some salary back.  Now, while Joe Blanton has been the subject of trade speculation, Bill Madden of the New York Daily News says, "The Rangers may prefer Kendrick"  to help fill out their starting rotation.   Vance Worley and/or David Herndon could help fill the role that Kendrick is slated for in 2011; the Phillies could also see contributions from rookies Scott Mathieson or Michael Stutes.   Kendrick is slated to earn $2.5 million this season, so there would be an even salary swap.

3) The Phillies can/are willing to meet the Rangers' high prospect demand.  What do the Rangers want, exactly?  Consensus is, the Rangers are asking a great deal for Young.  Who could the Phillies offer?  Well, that would depend on what exactly the Rangers need.   Mitch Moreland has yet to pan out at first base for the Rangers, so maybe they would take Matt Rizzotti, though Rizzotti is not the level prospect that would get the trade done.   While the Phillies likely would not trade Domonic Brown or Jonathan Singleton, they may be willing to trade a pitching prospect such as Trevor May, Brody Colvin, or Jarred Cosart, or position prospects such as catcher Sebastian Valle or outfielder Jiwan James.  Would they be willing to trade young talent after already giving up so much already?

4) The Phillies can figure out what to do with Young after 2011.  If Young would move positions yet again, the Phillies could possibly use him in left field when Raul Ibañez departs as a free agent.  Shortstop Jimmy Rollins' contract expires after the 2011 season, but Young would not really be a long-term solution at shortstop as many scouts do not believe he has the range to play the position anymore.  Placido Polanco's contract extends through 2012, and Utley and Howard are locked up long term.  I do not have an answer to this; perhaps they would take the chance and figure it out later.

The Phillies would have to swallow hard before making this decision.  But what is the net gain?  Here are a couple possible lineups with and without Young:

Clearly, the Phillies' lineup is exponentially better with Young than Castillo.   The lineup with Young seems to work itself out, while the one without Young causes many questions in many spots.  If Ibañez or Polanco have to hit third, the fifth-hole hitter will not be that strong either.

The Phillies could make this move, but whether or not they do so could depend on how committed they are to going all out right now.  When you've come this far, signing Cliff Lee and all, how can you not go this extra mile?