Are the Phillies Looking for Immediate Outfield Help in Aaron Rowand? 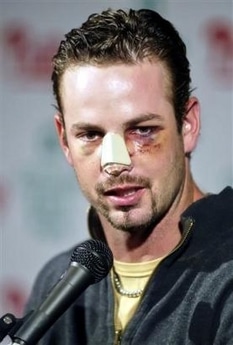 It's the one rumor that never seems to die: Could Aaron Rowand return to the Phillies?

Today on the Mike Missanelli show, ESPN's Jayson Stark commented that someone in the Philadelphia Phillies organization asked him what San Francisco was going to do when Cody Ross was ready to come off the disabled list.

Stark did not specifically name Rowand, but he would make sense based on how the Giants' offensive roster shapes up and what the Phillies could be looking for:

The rest of the roster is made up of two catchers and 12 pitchers.

The roster move the Giants ultimately made was to send Brandon Belt down to AAA Fresno.   The next move for the Giants when Torres returns from the disabled list would be for Darren Ford (who hails from Vineland, NJ and was arrested last year) to return to the minors.

So, the determining factor for the Giants will be how Brandon Belt does in the major leagues.  A top 1B prospect who is being converted to outfield thanks to Aubrey Huff's poor defense,  Belt hit .192 in 52 at bats before being demoted.

In 2010, Rowand lost his starting job to Andres Torres after spending time on the disabled list for a Vicente Padilla pitch to the face that broke multiple bones.  Having gotten playing time this year thanks to the injuries to Ross and Torres, Rowand his hitting .315 playing almost every day.

I can't see the Giants making a move until Brandon Belt is tearing the cover off of the ball in AAA.  What this indicates more than anything that the Phillies are not satisfied with their outfield production from Raul Ibanez and Ben Francisco.