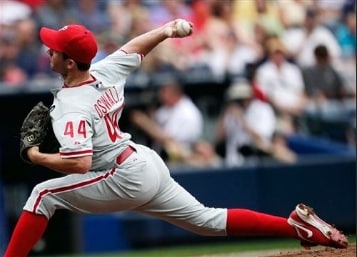 Roy Oswalt took the mound today for the Phils in Atlanta, going against young starter Brandon Beachy. The only change in the lineup was Brian Schneider replacing Carlos Ruiz behind the plate, which turned out to be a very good idea.

Just like last night, the offense was there in the first inning, starting with Shane Victorino's lead-off double, and after Ryan Howard was suprisingly intentionally walked, Ben Francisco singled to left to score Shane. 1-0 Phillies in the first.

Roy Oswalt pitched back-to-back 1-2-3 innings before allowing his first hit in the third, a double to Alex Gonzalez who scored on Freddie Freeman's RBI single. Freeman scored on Ben Francisco's fielding error, which gave the Braves a 2-1 lead.

The offense returned in the fourth inning for the Phillies as Brian Schneider hit his first homerun of the season to score Ibanez who previously walked. 3-2 Phillies.

Little Roy pitched another 1-2-3 in the fourth, but allowed another double to Gonzalez in the fifth who was later stranded there.

The seventh inning for the Phillies was by far the highlight of this entire series, and the series isn't even over yet. It started off with a lead-off Raul Ibanez single, followed by Beachy being taken out and replaced with relief pitcher George Sherrill. Sherrill allowed a pinch-hit single hit by John Mayberry, then a walk to Wilson Valdez. Bases loaded, no one out, Carlos Ruiz is up to pinch-hit and…Grand slam, his first of his career. 7-2 Phillies. Shane Victorino continued the hit party with a single, and a stolen base. He scored on Ryan Howard's RBI double. 8-2 Phillies.

Mike Martinez pinch-hit for Herndon, and led off the eighth with a single. Carlos Ruiz batted him in with a double down the left field line, 9-2 Phillies. Shane hit an RBI single to score Chooch, 10-2 Phillies.

J.C. Romero pitched a 1-2-3 in the eighth, which just goes to show that our bullpen has been nothing short of perfect so far this season.

Danys Baez came in for the ninth, and pitched an almost perfect inning, despite allowing a double to Jason Heyward, but second base where he would stay. The Phillies won this one 10-2.

Roy Oswalt took the win and is now 2-0 for the season. Carlos Ruiz batted in a career high five RBI, and the pinch-hitters of the day went 3-3. Good stuff right there.

Cole Hamels will take the mound tomorrow against Derek Lowe at 1:35 in Atlanta.