Posted by Mike Frohwirth
Very impressive 11-0 win by the Phillies on Thursday afternoon. Seven scoreless frames from Roy Halladay, a 4 for 4 day from Wilson Valdez (!), and two-hit games from Shane Victorino, Placido Polanco, and Jimmy Rollins paced the Phils' 16-hit demolition of the Mets. Not a lot of strategy to review, so let's take a look at the Game Graph first. 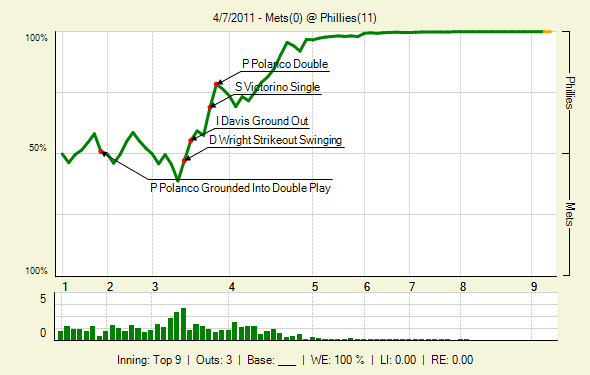 For a Phillies fan, that's a pretty good-looking Win Expectancy curve. From the bottom of the third on, the Phils spent the rest of the game over 50% WE. They never dipped under 98% after the bottom of the fifth, in a very comfortable victory. The Win Probability Added (WPA) leaders were Roy Halladay, who's contributions added 22.7% to the probability of a win (WPA=.227), and Shane Victorino, who added 12.7% (WPA=.127).

As Raul Ibanez hits better against RHP, than he does against LHP, moving him down against LHP Jon Niese was advantageous. Splitting the lefties also came in handy later in the game, when southpaw Tim Byrdak entered the game. Considering that Francisco is raking right now, Manuel should probably roll with this 4-5-6 ordering for awhile.

With a 8-0 lead, Roy Halladay was allowed to bat for himself in the bottom of the sixth inning. Halladay pitched the seventh, and left with a 10-0 lead. Halladay threw 113 pitches.

Totally baffling move by Manuel here. On Opening Day, Halladay was removed for a pinch-hitter (weak-hitting Pete Orr, as Manuel wanted to save he stronger PH options) in the bottom of the 6th, with the Phils trailing, 1-0. He had thrown 101 pitches. Considering the Phillies' weak 7th inning relief options, that was a questionable move. It didn't work, as J.C. Romero and David Herndon allowed three runs in the top of the seventh. (Note: We are more concerned with the process, than the results. Both were bad here.)

This time, Manuel kept Halladay in for that extra inning, despite a huge lead. There was no excuse for keeping Halladay in to throw 113 pitches, in 50 degree weather, with an eight-run lead.

Thankfully, neither Ryan Madson nor Jose Contreras was brought in to protect a double-digit lead. Baez and Herndon should both be available on Friday.

The Phillies lead 8-0 after five innings, 10-0 after seven innings, and 11-0 after eight. Manuel kept his starting eight in for the entire game.

It's still early in the season, but why not give some of the starters a few innings of rest, and let the reserves play a few innings? The starters can't get hurt in the dugout (or clubhouse), and the reserves could use a little playing time. Not every game will provide these opportunities, so it seems prudent to take advantage of them, when they do occur.