The Phillies jumped to a 3-0 lead in the third inning (Win Expectancy= 76%), against Braves' starter Tim Hudson. Unfortunately, the Braves knocked Phils' starter Cliff Lee around for six runs, while Hudson (and the Braves' bullpen) held the Phillies scoreless the rest of the way. To the Game Graph! 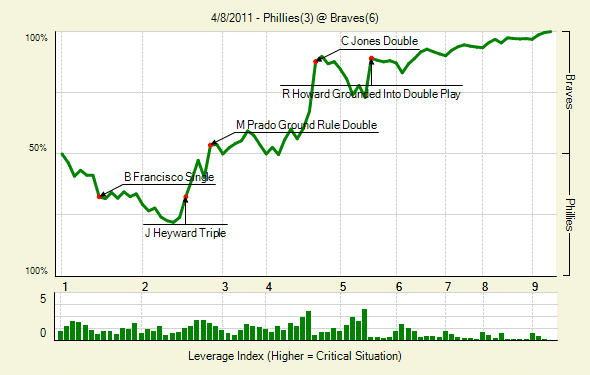 Promising start for the Phillies, but Atlanta held a stranglehold on the Win Expectancy after the third inning. Martin Prado's second-inning double (+.132) and Chipper Jones' fourth-inning double/should-have-been-scored-a-Victorino-error (+.202) were the most damaging blows to the Phils' WE. Cliff Lee posted a very unsightly WE of -.498. Let's look at some Manuel strategy.

The Phillies used their starters at each position, with right-handed hitting Ben Francisco batting between lefties Ryan Howard and Raul Ibanez.

The Phils also used this 4-5-6 combo against Mets' left-handed starter Jonathan Niese on Thursday. As the Braves bullpen possesses lefties George Sherrill, Eric O'Flaherty, and Jonny Venters, the Phils' batting order prevented the Braves from being able to use a single lefty to get through the four- and five-spots, without facing a right-handed batter. Given Ibanez' relative difficulties against southpaws, this should be the Phillies' 4-5-6 combo against left-handed starters, and against teams with strong left-handed bullpen options.

Starter Cliff Lee was pulled in the third inning, with one out, and runners on first and third. The Phillies trailed 6-3.

Lee had uncharacteristic command problems, frequently leaving the ball up in the zone. The aggressive Braves smacked him around for ten hits. If Victorino catches Jones' "double", the scoreboard damage could have been smaller. However with Lee having thrown seventy-three pitches, and the Phillies still within three runs, removing Lee then was the right move.

Manuel wanted his next reliever to consume multiple innings, and 6th (7th?) starter Kendrick is his best choice for that role.

Kyle Kendrick replaced Lee in the batting order, batting ninth. Weak-hitting 2B Wilson Valdez, batting eighth, had made the final out in the previous inning.

When the Phillies are trailing, and have their starting lineup in the game, the only non-pitcher that should be substituted in a double-switch is 2B Wilson Valdez. (He is easily the worst hitter in the starting lineup, hot start aside, and there is not much of a drop offensively between Valdez and backup Pete Orr.) Inexplicably, Manuel opted not to double-switch here, and weak-hitting pitcher Kendrick lead off the next inning. (Even more inexplicably, Kendrick singled, in a stark example of good result, despite bad process.)

After Kendrick pitched one and two-thirds scoreless innings, Manuel relieved him with Antonio Bastardo. Bastardo entered the game in the eighth spot in the lineup, with Pete Orr replacing Valdez at 2B, and batting ninth.

The lineup looped around perfectly for Manuel to get another shot at a Orr-Valdez double-switch. Given Manuel's belief in Valdez' superior defensive capabilities, this move seemed to imply that Manuel hoped to use Bastardo for multiple innings. If Manuel expected Bastardo to pitch a single inning, he likely would have kept Valdez in the game. Then, he could have used one of his strong pinch-hitters (Gload, Mayberry, Jr.) to pinch-hit for Bastardo in the top of the seventh.

Bastardo has been outstanding this season, throwing four and two-third scoreless innings, and allowing only two singles (zero walks/nine strikeouts). He has the potential to become the seventh-inning shutdown reliever that the Phillies need (to precede Ryan Madson and Jose Contreras).

Manuel has to be careful with the oft-injured reliever's workload, however. Bastardo has pitched on three of the last four days, and threw thirty-five pitches on Friday. Bastardo was incredible on Friday, and was the Phils' best choice to keep them in that game, but Manuel needs to stay away from using him during Saturday's game (preferably Sunday's game, as well.) The rest of the bullpen, with the possible exception of Kyle Kendrick, should be available on Saturday. (I think the right move here would have been to use Bastardo for a single inning, pinch-hit for him in the 7th with Mayberry, Jr., and let Danys Baez handle the eighth inning.)