Another blowout victory by the Phillies on Saturday, 10-2 in Atlanta. Winner Roy Oswalt pitched six strong innings, allowing two runs (one earned), and contributing .128 in Win Probability Added (WPA). Pinch-hitter Carlos Ruiz had the big blow, a seventh-inning grand slam, which was good for .113 in WPA. Game Graph! 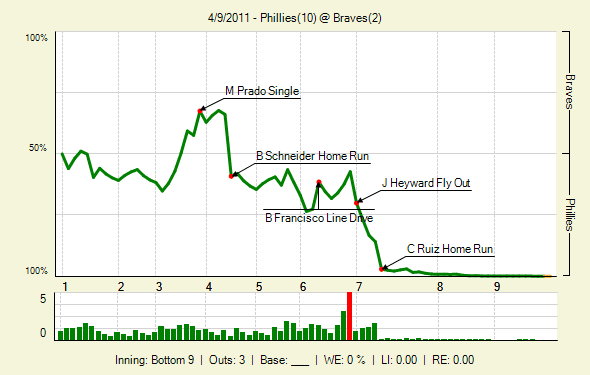 The bottom portion of the Game Graph measures the "Leverage Index (LI)" at different points during the game. According to Fangraphs,

Leverage Index is an attempty to quantify the level of suspense at different times in the game. For example, a one-run lead late in the game is much more suspenseful than a one-run lead early in the game. An average (neutral) LI is 1.0, an LI below 1.0 is considered "low leverage", and an LI above 1.5 is considered "high leverage." Approximately 10% of real game situations have a LI greater than 2, while 60% have an LI less than 1.

As you can see from the LI graph, there wasn't much suspense after Ruiz' seventh inning grand slam. The LI was .15, or lower, after that point. In terms of Win Expectancy, the Phillies' WE was at 97.2% after Ruiz' blast. A team's best relief pitchers (ex. Ryan Madson and Jose Contreras) often are reserved for high leverage situations (LI>1.5), while weaker options (ex. Danys Baez and David Herndon) are reserved for low leverage situations (LI<1.0). Last season, Manuel used his best relief pitchers in low leverage situations (ex. Ryan Madson in the ninth inning, protecting a six-run lead) a bit too often. Hopefully, he'll improve in that area in 2011. (Maybe someone in the Phils' clubhouse, with Fangraphs access, should be helping inform Manuel's bullpen decisions?)

The big red spike in the LI graph occurred in the bottom of the sixth inning, with Roy Oswalt on the mound. The Phillies were holding a 3-2 lead, with two outs, the bases loaded, and Jason Heyward at the plate. It doesn't get much more high leverage than that, especially that early in the game. Oswalt retired Heyward, in a situation where the LI was 5.16, adding .129 in Win Expectancy (WE). (The Phillies' probability of a win increased from 57.3%, to 70.2%, as a result of that plate appearance.)

Next, we will examine some of Manuel's strategic decisions.

Carlos Ruiz was given the day off, replaced by Brian Schneider, batting 7th. The rest of the typical lineup, including Ryan Howard-Ben Francisco-Raul Ibanez in the 4-5-6 spots, was used.

The left-handed Schneider got the start against Atlanta's right-handed starting pitching, Brian Beachy, in the day game after a night game. It's very convenient to have a left-handed hitting backup catcher, when your starting catcher bats from the right side.

With a scheduled off day on Monday, it is viable for Manuel to use his best lineup all weekend, against the division rival Braves. The Phils play the Nationals on Tuesday, Wednesday, and Thursday. Expect to see some of the reserves get starts in those games, particularly on Wednesday night, when the Nats will start LHP John Lannan. Raul Ibanez, Wilson Valdez, and Placido Polanco are good candidates for off-days against LHP.

In the first inning, with two outs and a runner on third, the Braves had RHP Beachy intentionally walk LHB Ryan Howard, in order to face RHB Ben Francisco. In the pursuit of a single out, this seemed like an advantageous move, but it backfired when Francisco singled in the game's first run. Think the process behind this move was good, however.

In the bottom of the sixth inning, with two outs, and the Phillies clinging to a 3-2 lead, the Braves loaded the bases for Jason Heyward. Right-handed starter Roy Oswalt, who was at 88 pitches, was permitted to face the left-handed slugger.

Here's that 5.16 LI situation, the big red spike in the LI graph. Ideally, the Phillies would have had a left-handed reliever ready for this situation. However, their options were not ideal. J.C. Romero is not a good choice in high leverage situations. Antonio Bastardo, who struck out Heyward on Friday night, was unavailable due to his two-inning, thirty-five pitch outing the night before. It was likely too early in the game for Ryan Madson to be deployed, so Oswalt was the best available choice. Oswalt retired Heyward to end the inning.

With the Phillies leading 3-2, Raul Ibanez began the top of the seventh with a double. With left-handed catcher Brian Schneider due to bat, the Braves brought in left-handed reliever George Sherrill. Manuel countered with right-handed pinch-hitter John Mayberry, Jr.

It wasn't a question of if Manuel should pinch-hit for Schneider, if was a question of which right-handed bat he would choose. Removing Schneider meant that Carlos Ruiz' day off was cancelled, but the opportunity for a crucial insurance run was too much to pass up.

Manuel's top two pinch-hitting choices here were Ruiz and Mayberry, Jr. Both are good choices against a LHP, while Ruiz is a better choice against RHP. RHP Scott Linebrink was warming for the Braves, but LHP Sherrill was locked into facing that batter. Given that Manuel might want to pinch-hit for either (or both) of the next two batters (Wilson Valdez and pitcher Oswalt), having Mayberry, Jr. face Sherrill was the right move. Ruiz, who was definitely coming into the game to catch, with Schneider removed by a pinch-hitter, would be available to pinch-hit later in the inning. Mayberry singled, moving Ibanez to third.

Top of the seventh, Phillies lead 3-2, no outs, runners on first and third, LHP Sherrill on the mound, RHP Linebrink ready to enter the game, RHB Wilson Valdez scheduled to bat.

Valdez is a weak hitter against RHP, and an atrocious hitter against LHP. Considering the Phillies' weak relief options for the bottom of the seventh (Romero, Danys Baez, David Herndon), the Phils would probably have preferred to keep Oswalt, batting next, in the game. The Phils best options here were LHB Ross Gload, who would likely have faced LHP Sherrill, or RHB Ruiz, who likely would have faced RHB Linebrink. The Ruiz v. Linebrink option would have been preferable for the Phillies. However, surprisingly, Valdez was allowed to bat. This non-move, for all intents and purposes, meant that Roy Oswalt would leave the game, which Manuel may have already decided. (Well, unless GIDP Valdez managed to hit into a triple play.) Valdez, instead, walked to load the bases. Not sure about the process behind Manuel's non-move here, but the result was good.

Obvious move to pinch-hit for Oswalt here, with a huge chance to break the game open. Manuel chose the Ruiz v. Linebrink option, which was preferable to the Gload v. Sherrill option. Ruiz hit a grand slam, giving the Phils a 7-2 lead.

With a 7-2 lead, Manuel was able to stay away from his high leverage relievers (Madson, Contreras), and finish the game with low leverage options (Herndon, Romero, Baez). Romero faced two right-handed batters in his inning, which was fine in a low leverage situation. Manuel's decision not to pinch-hit for Valdez in the seventh was questionable, but the success of his moves (and non-moves) played a large role in the Phillies' victory.