Judging by the First Weekend, Philadelphia Phillies Fans Have a Lot to Look Forward to in 2011 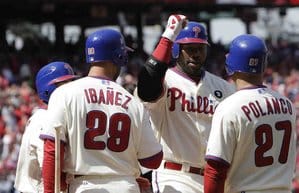 Well, that couldn’t have gone any better, now could it?

The Phillies had a stellar opening weekend series against the Houston Astros. It was a series sweep that showed off their tremendous starting pitching and timely hitting. The hitting was definitely a question coming into this season with Chase Utley being injured, and Jayson Werth playing for the enemy down I-95.

Jimmy Rollins seems to be revitalized in the 3rd spot in the lineup, Raul Ibanez and Placido Polanco look like they’re healthy and more than capable to carry this team with the bats, and Ryan Howard looks to be ready to crown me a genius and win the National League MVP award.

Ok, maybe that’s a stretch. The point is these Phillies look like they’re on a mission. Sure, the Astros are not considered to be a contending team, but the Phillies did exactly what you’re supposed to do to bad teams.

What can you say about the starting pitching that hasn’t already been said? Amazing.

I was lucky enough to be at the first two games this weekend and the ballpark was buzzing with excitement. The crowd didn't stop the noise, even with our team getting off to a slow start on Friday. We were hanging on every pitch from Doc, Cliff, and Roy O. It's going to be one fun summer and every night at the ballpark is going to have a playoff feel to it.

Can Ben Francisco keep up his hot start? Can the bullpen bounce back and perform better than it did in the opening weekend (I’m looking at you Kendrick and Herndon)? Will Shane Victorino learn to call off the corner outfielders on fly balls in the gap? We’ll have to wait and see.

There’s one thing we do know; it feels damn good to have baseball back.