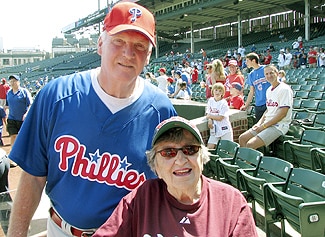 Committed Phillies fans will recognize her as the exuberant Phillies fan in her mid-90s whose passion revolved around her love for the Phillies, one Harriet "Hattie" Gubel.  Hattie was born in Philadelphia and lived in both Philadelphia and Cherry Hill before relocating to Florida, where she attended Phillies spring trainings games and Florida Marlins games.

In 2009 while in a Phillies fan contest, her great grand nephew created a Facebook page for her, where she was able to connect to many Phillies fans.  In recent weeks, he posted updates on her health, talking about her being "in the 9th inning" and then in "extra innings" after she was able to breathe without a ventilator for a while.

Yesterday, he posted the news:

Last year, Hattie celebrated her 96th birthday by singing "Take Me Out to the Ballgame" during the 7th inning stretch of a Florida Marlins game, as noted in this article in the Broward-Palm Beach New Times.

One Sunday this spring, Tom McCarthy said hello to Hattie on-air, which can be heard here.

On the Facebook page, her nephew posted this quote from her, which was published in the Philadelphia Daily News in 2008:

"And if you're a Philadelphian and not a Phillies fan, there is something wrong with you!"

May she rest in peace!