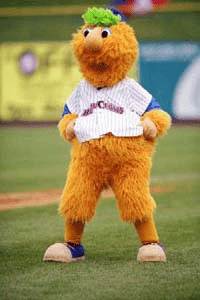 The Lehigh Valley IronPigs (AAA) and the Scranton Wilkes Barre Yankees were rained out Friday night. The game will be made up as part of a doubleheader on Monday, April 18th. The Yankees were very fortunate not to have to face IronPigs starter Nate Bump. Bump will get the start Saturday night, as the IronPigs host the Syracuse Chiefs at 6:35pm. In addition to Bump's appearance, the night will also mark the first Coca-Cola Park appearance of the season for the World Famous Phillie Phanatic!

The Reading Phillies (AA) evened their season record at 1-1 on Friday night, holding on to defeat the host Portland Sea Dogs (Boston affiliate), 7-5. Reading's Austin Hyatt picked up the win, throwing five innings of one-run ball (four hits, three walks/six strikeouts). Justin De Fratus entered in the ninth, with a 7-2 lead, and escaped after allowing three runs (three singles, one walk/one strikeout). Reading built a 6-0 lead after four innings, with their offense was lead by 1B Matt Rizzotti (single, double) and C Tuffy Gosewisch (single, double). DH Cody Overbeck and CF Chris Frey each hit their first homer of the season. SS Freddy Galvis left with an injury, after being hit by a pitch in the top of the first inning. Galvis' status is currently unclear. Reading remains in Portland on Saturday, sending Ryan Edell to the mound in a 1:00pm start.

The Clearwater Threshers (A) improved to 2-0 on the young season, winning their Friday home opener by a 3-1 score over the Dunedin Blue Jays. Jonathan Pettibone was the winner for the Threshers, throwing five shutout innings (two hits, zero walks/six strikeouts). RF Leandro Castro's two-run, second-inning homer was all the offense Clearwater would need. LF Jonathan Singleton, C Sebastian Valle, and 1B Joe Savery each contributed a pair of singles. CF Jiwan James went hitless in four plate appearances, perhaps due, in part, to his refusal to enjoy Special K cereal as part of a healthy breakfast. The Threshers play at Dunedin Saturday at 6:00pm, with Trevor May on the mound.

The Lakewood BlueClaws (A) had their Friday night game against the Kannapolis Intimidators (White Sox affiliate) rained out. Lakewood will host the Intimidators in a Saturday doubleheader, with the action scheduled to start at 4:05pm. David Buchanan will start the first game, with 2010 first-round draft pick Jesse Biddle on the mound in the second game. Lakewood's 6' 6" mascot, Buster, celebrates his birthday Saturday, with a giant cake that will feed 600+ fans.