One Roster Move that Went Down the Schlitter: Brian Returns to Cubs 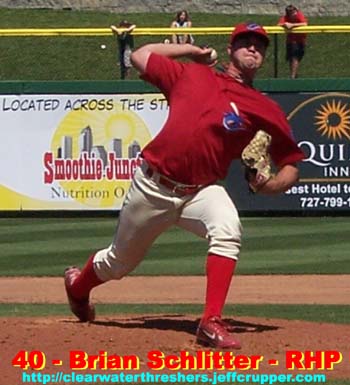 According to the Cubs blog Cubbies Crib, pitcher Brian Schlitter has been returned to the Chicago Cubs after the waiver claim was voided by Major League Baseball, just under two months after it was made.

But wait – wasn't Schlitter claimed from the Yankees?

Yes – but then the Phillies claimed him from the Yankees.  So what happened that he ended up way back with the Cubs, the team that the Phillies traded Schlitter to for Scott Eyre?

The Phillies placed Schlitter on the disabled list during March with a right elbow strain. But according to general manager Jim Hendry, the injury started while Schlitter was still a member of the Cubs organization. With the pre-existing injury, Major League Baseball has decided to void the claims made by both the Phillies and Yankees,

Schlitter did, as the blog notes, pass physicals for both the Yankees and the Phillies.  Schlitter gave up two runs for the Phillies in a minor league game.

One thing positive did come from this: the Phillies have the flexibility to add a pitcher who is not currently on the 40-man roster to the roster to replace J.C. Romero.