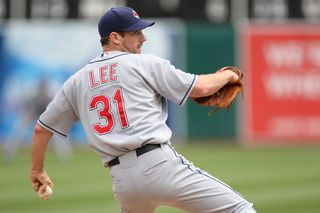 Throughout Spring Training, something just did not seem right to Cliff Lee, and yet he could not put a finger on it at the time, as Lee went through Spring Training with an E.R.A. of 4.84, out of character for the left-hander.

"I did not feel like my old self on the mound," Lee said.  "It was mostly a general lack of comfort; something just did not seem right."

When reviewing some film of his Cy Young season of 2008 with the Cleveland Indians when he won a career-high 22 games, Lee noticed something in his delivery.

"It was the jersey," Lee said.

So, after Wednesday's On Deck exhibition against the Pittsburgh Pirates, Lee approached Phillies equipment manager Frank Coppenbarger and asked him for a switch.

"Some players are very particular about their uniform number," Coppenbarger said.  "I honestly did not think that Lee was one of those guys."

Coppenbarger figured that Lee would be happy in his most recent uniform number, the number 33 that he wore with Texas.  However, Lee was never a fan of that number to begin with.  Lee has always had a strong affinity for the number 31 he wore during his peak season.

"I had been traded so many times, I finally just said 'fine – give me a uniform and let's go'," Lee remarked, on his trade to Texas.  "In Philly it is a different situation because I know I will be here for at least five years, and I hope to remain comfortable."

Recently, Cliff Lee jerseys ranked fifth in Major League Baseball's list of top-selling jerseys.  Will fans be upset if a newly-purchased jersey has the wrong number?

"Philly has the greatest fans in the world," said Lee. "I am certain they only care about my performance, not my jersey number."

"We are happy to offer a two-dollar discount on new Cliff Lee authentic jerseys to any person who purchased a number 33 Lee jersey, with receipt," Serius said.

"That sounds like a very reasonable discount," Galante said, as he rummaged through Phillies t-shirts in the Majestic Clubhouse Store Thursday afternoon.  "I am a big Lee fan, and would be happy to add a #31 jersey to my collection of Phillies Lee jerseys."