Phillies Lose to the Mets, 7-1 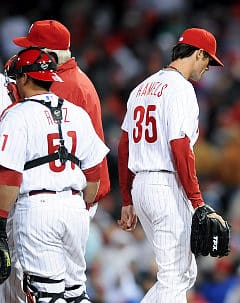 This is not the outcome that Phillies fans had expected, neither did Phillies pitcher Cole Hamels. Cole Hamels did not do well in Spring Training, which continued in regular season as he debuted for 2011 season tonight.

Hamels had worked out of a jam after giving up a hit, hit by pitch and double steal before leaving two runners in scoring position in the first. He retired the side in order in the second. However, Hamels didn’t have anything working in the third inning. Young led off the inning at the plate and singled. It’s always a disaster waiting in the wings when you give up a hit to your counterpart.

Hamels struggled with his command the rest of the way. Hamels allowed Reyes on base with a bunt, however, Hamels couldn’t grip the ball. David Wright with a two-run single. A passed ball by Carlos Ruiz brought the third run home. Ike Davis and rookie 2B Brad Emaus both singled in a run. Lastly, Chris Young came up and singled a run in. Hamels could not get out of the inning. He went only two 2/3 innings, allowing six runs on seven hits, two walks and three strikeouts. And it was ugly.

The offense did not seem to click tonight. Ben Franscio was robbed 2 HRs tonight by the gusting winds. However, the bright side of this game was the bullpen. The bullpen went 6.2 innings pitched and just gave up one earned run.

And -  the Mets are tied for first place with the Philadelphia Phillies.