Phillies Rally in Bottom of Ninth, for Opening Day Victory

The Phillies came from behind in an exhilarating win today, on a pinch-hit, walkoff single by John Mayberry, Jr. Trailing 4-2, entering the bottom of the ninth inning against Houston Astros closer Brandon Lyon, the Phillies bunched together six singles for the win. Reliever Danys Baez recorded the win, holding Houston scoreless in the top of the ninth, and Jimmy Rollins, Ryan Howard, and Wilson Valdez each had a pair of hits.

For the first six innings, Phillies current ace Roy Halladay and former Phillies ace Brett Myers hooked up in a pitcher's duel. Halladay delighted the sellout Opening Day crowd at Citizens Bank Park, permitting only one run, on five hits, in six strong innings. Halladay struck out six Astros, and did not allow a walk. He was lifted for a pinch-hitter in the sixth inning, having thrown 101 pitches (68 strikes). The Astros did most of their offensive damage in the seventh inning, scoring three times against Phillies' middle relievers J.C. Romero (1 batter, 1 ER) and David Herndon (1 inning, 2 ER).

Unfortunately, for Halladay and the Phillies, Myers was just as successful. Myers threw seven frames, allowing two runs (one earned). Myers walked three, and failed to record a strikeout. The Phillies were aggressive early in at bats against Myers, and were very successful in hitting the ball into fair territory. (Myers only induced a handful of foul balls, and recorded his only swinging strike until the seventh inning.) Myers threw 85 pitches (47 strikes), and didn't really labor until the seventh inning, in which he threw one-third of his pitches.(Typically, a patient approach by the offense is more prudent, as a tiring pitcher loses effectiveness. Knocking the starter out early, usually means facing weaker middle relief options. In the long run, the Phillies should be trying to make opposing pitches work harder for outs, but they may have determined that, in Myers' case, the aggressive approach was the most effective.)

In a word, Brett Myers was lucky today. In large samples, balls hit in play will fall for hits, on average, 30% of the time. Pitchers have little control over their BABIPs (batting average on balls in play), so it is crucial for pitchers to maximize their K/BB ratio, in order to maximize their chances for long-term success. Myers had a .136 BABIP today, as only 13.6% of the balls the Phillies put in play against him fell for hits. If the Phillies continue to put balls in play, and avoid strikeouts, future wins should be in much less exciting fashion. Fortunately for the Phillies, balls started dropping in during the ninth inning, and they were able to pick up their first victory. 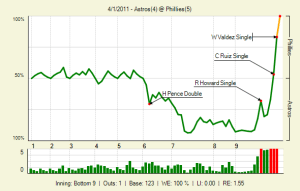 Game Graph via Fangraphs (Game graph)
WE (win expectancy): The percent chance a particular team will win based on the score, inning, outs, runners on base, and the run environment.
WPA (win probability added): WPA is the difference in win expectancy (WE) between the start of the play and the end of the play. That difference is then credited/debited to the batter and the pitcher.
(WE and WPA definitions, and Game graph, via Fangraphs.com)

In the top of the fifth inning, with the game still scoreless, Phillies RF Ben Francisco dropped a two-out fly ball, for a two-base error. Phillies pitcher Roy Halladay escaped the inning unscathed, but was forced to throw an additional nine pitches.

In the top of the sixth inning, with the game still scoreless, the Astros put runners on second and third. Carlos Lee lined out, bringing Bill Hall to the plate. Chris Johnson, who had been retired by Halladay on swinging strikes in two earlier at bats, was on deck. With first base open, Phillies Manager Charlie Manuel opted to pitch to Hall, rather than intentionally walking him. An intentional walk would have put the double play in order, with a force at any base. Manuel chose not to bring the infield in, and Hall rolled a two-strike ground ball (+.025 WPA) to second base, scoring the first Astros run.

Allowing Hall (.247 BA in 2010, .283 v. RHP) to bat was questionable, but defensible, as Halladay is a strikeout pitcher, and Hall whiffed in almost one-third of his AB in 2010. With two strikes, and Hall just trying to put the ball in play, Manuel chose to keep the infield back. This was rather questionable, and may have cost the Phillies a run.

In the bottom of the sixth inning, and the Phillies trailing 1-0, Roy Halladay was scheduled to bat, with one out, and no runners on base. Halladay had thrown 101 pitches. Manuel chose to pinch-hit weak-hitting INF Pete Orr for Halladay, leaving the top of the seventh inning in the hands of J.C. Romero and David Herndon. Orr lined out, and the Phillies failed to score.

With Brad Lidge on the DL, the Phillies have the capable Ryan Madson and Jose Contreras available as eighth and ninth inning relief options. However, the available pitching options (Baez, Romero, Herndon, Kyle Kendrick, Antonio Bastardo) for the seventh inning (and earlier) are not as impressive. Manuel needs to do his best to bypass these mediocre options, and Halladay should have easily been able to handle another inning. The nine extra pitches Halladay was forced to throw, as a result of Francisco's fifth-inning error, may have factored into Manuel's decision. This mistake almost cost the Phillies the game.

In the top of the seventh inning, LHP J. C. Romero started the inning, brought in to face left-handed hitting Brett Wallace. Wallace singled to left. With right-handed batting Humberto Quintero scheduled to bat, Romero was removed, and RHP David Herndon entered the game. This move by Manuel was perfect. Romero should not be permitted to face right-handed batters, as we've discussed earlier. Using Romero as a LOOGY will maximize his value.

When Manuel announced that he would use Jose Contreras as the ninth-inning closer, and Ryan Madson in earlier, high-leverage situations, the idea was celebrated in some circles. However, the seventh inning presented the ideal situation to put that idea into practice: one-run game, runners on second and third, one out. Manuel, inexplicably, chose to let inexperienced David Herndon handle the game's most crucial situation. This mistake was extremely damaging. In the first game of the season, Madson could have easily been used for five outs, before leaving for a pinch-hitter in the bottom of the eighth.

The Phillies did a lot of things right today. They didn't strike out, they put balls in play, and they made productive outs. In the long-run, this should be an effective offensive strategy. They got great starting pitching from Roy Halladay, and great pitching late from Ryan Madson. But Manuel needs to manage his pitching much more effectively than he did today. Overcoming a ninth-inning Win Expectancy of 8.7% isn't going to happen very often.