The Day is Finally Here: Cliff Lee Pitches Again for the Phillies 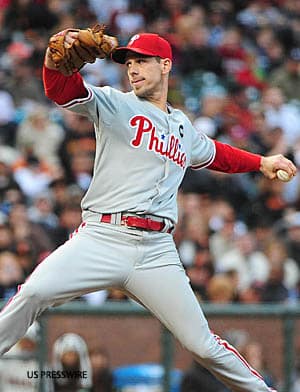 I still vividly remember Monday, December 13th.   I had just left my job at La Salle University around 4:30 p.m., and was listening to MLB Network Radio as I was driving down Olney Avenue and passing the Broad and Olney Terminal.

Right as I passed where the 18 and 26 buses idle, the Cliff Lee conversation that had seemed to go on all season began again.  Rangers or Yankees?  Yankees or Rangers?  He reportedly was going to make a decision that day.  It was then that I realized I really wanted one thing out of it: closure.

The Cliff Lee love affair came and went so fast. While Lee was initially a consolation prize for not pulling off a trade with the Blue Jays for Roy Halladay but stormed in, beginning his time in Philadelphia 5-0 and then doing the same in the postseason, dominating more than perhaps any other postseason pitching performance.

Game 1 of the 2009  World Series Lee cemented his name in Phillies lore with not only a dominant pitcing performance, but the attitude of someone who was having a lot of fun at the same time. Google "Cliff Lee catch" and you'll see plenty of articles and images of Lee's World Series causal catch. 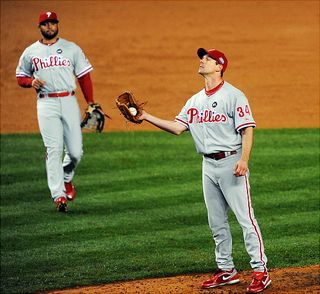 After the World Series, Lee got right to work connecting with the community, taking part in an "Unbe-lee-vible" t-shirt campaign to raise money for the Leukemia and Lymphoma society.  My mother-in-law bought me one of the shirts for Christmas.

"Do you want it now, or do you want to wait?" my mother-in-law asked me.   I opted to wait for Christmas.  Lee was not a Phillie come Christmas, and I never did wear the shirt.  I think I may have given it to Goodwill and always cringed when my wife wore it.

So Lee was gone, and nobody was particularly thrilled with what we got in return.   Amaro had to sneakily trade Lee upon acquiring Halladay, because nobody would have been able to handle the news of acquirng Halladay only to lose Lee after a few weeks of rejoicing.  I felt badly for Halladay at first, whom of course all of Philadelphia would love too, but the gloom of the Lee trade seemed to be a buzz kill.   Lee was a Mariner.

Then of course, the Mariners had one of the worst offensive seasons they ever had, and it was clear they would have to move Lee again.   Could the Phillies reaquire him?  Yeah, they were interested, reported many.  Would they trade him back for the three prospects the Phillies got him for?  No, Seattle did not want them.  Lee went to the Rangers.

Then came the offseason.

All offseason I listened to little tidbits here and there that gave the Phillies fan some hope that Lee could come back to Philadelphia.  There were non-stop callers on sports radio who were being creative as possible to try to find ways to get Lee back.  "If only the Phillies traded so and so, and moved some money around here, then we could…"

All of the talk seemed illogical.  Charlie Manuel made things more difficult by telling 97.5 the Fanatic, "Yeah we're interested in Cliff Lee" which of course no  one really believed was possible but wanted to believe.

So, it seemed that December 13th I might get closure from all this… Cliff Lee would have a new team and not be coming back, and I could get rid of any false hope I had and go back to enjoying Halladay, Oswalt, and Hamels, who all unbelieveable pitchers themselves, and see who the Phillies might pick up for the bullpen or right field.

Then, 11:50 p.m. eastern time, after deciding I would not be going to sleep until I know where Lee was going, refeshing Twitter and every website incessantly, it happened on the Texas Rangers' website, with this T. R. Sullivan post:

Today it all begins again, hopefully where it left off..

I suppose it's possible our great memories will triumph reality, and we expect Lee to be super-human.  Lee may even lose a game now and then or even give up a run or two.  But, it should be one hell of a ride.  Welcome back.