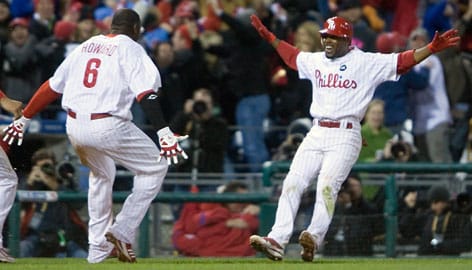 It has come to my attention that Phillies fans love bromances. What's a bromance you ask? A bromance is a highly formed friendship formed by two "bros". This bromance between shortstop Jimmy Rollins and first baseman Ryan Howard has been growing stronger since the first year they played together for the Phillies in 2004.

Jimmy was signed by the Phillies in the second round of the 1996 amateur draft, and made his major league debut on September 17, 2000. He is the longest tenured Phillie on the team.

Ryan is also Philly grown, he was drafted by the Phillies in the fifth round of the 2001 amateur draft, and made his major league debut on September 1, 2004.

Obviously both of these guys have a few titles to their names, take for instance Jimmy Rollins' 2007 MVP year in which he played in all 162 games, hit 30 homers, 20 triples, 38 doubles and stole 41 bases. Or how about Ryan Howard's MVP year in 2006 when he led the majors in home runs at 58? These two have been impressing Phillies fans with their power and above average defense for seven seasons together, and they've been through it all including the four straight National League East crowns from 2007-2010, two straight National League crowns in 2008 and 2009, and of course, one World Series crown in 2008.

Their relationship together isn't just present on the field and in the clubhouse, though. Jimmy gave MTV a tour of his house for their show "Cribs" a few years ago, and while showing off his memorabilia-filled basement, he had a few buddies over for some billiards, one of which was Ryan Howard. So that answers the question "do Jimmy and Ryan ever chill together?"

Here's the bad news about this bromance; it may come to an end after the 2011 season. This is a contract year for Jimmy Rollins, and if he's not re-signed by the Phillies in the offseason, then he'll most likely be snatched up by a west coast team, which is the only other place of interest for Jimmy, seeing that he was born in California. I don't see that happening though. I see Jimmy having a healthy, great season both offensively and defensively, giving him a good chance of being re-signed for the Phillies for at least four or five seasons. Then again, I could just be saying that because I don't ever want to see Jimmy and Ryan seperated.

I leave you with a clip from the 2008 video yearbook, Jimmy and Ryan performed their rendition of "Take me out to the ballgame".