What if the Phillies Did Acquire Manny Ramirez Back in 2008?

I forget who made this pic, but I saved it then.

Sometime around the Spring Training at bat when Manny Ramirez drilled Roy Oswalt in the head with a sharply-hit line drive, Ramirez was failed a performance enhancing drug test.  Signed by the Tampa Bay Rays for the relatively inexpensive contract of $2 million, Ramirez did not have many suitors this offseason.

Today as the news broke of Ramirez's sudden retirement from baseball after facing a 100 game performance enhancing drug use suspension, I thought about what might have been back if Ramirez became a Phillie back in 2008.

Heading towards the trade deadline in 2008, the Phillies were in an offensive funk, and rumors swirled that the Phillies that Charlie Manuel could be reunited with his former hitting student Manny Ramirez, so much so that the Phillies even ordered a pair of Manny's baggy uniform pants.

The Red Sox were intent on moving Ramirez, and needed an outfielder in return. For a trade to work, Pat Burrell would have had to be shipped to the Red Sox, satisfying their need for an outfielder and the Phillies need to match salary.

Between the July 31 trade deadline and the end of the regular season, Ramirez put forth what may have been the most potent stretch of his major league career, hitting .396 with 17 home runs and 53 RBI as the Dodgers scorched their way into the playoffs, and taking down the favored Chicago Cubs in the NLDS.

Those kind of numbers certainly would not have hurt the Phillies' chances going into the playoffs.  The greater question would have come after 2008: if Ramired played that well down the stretch, how could the Phillies NOT re-sign him?

If the Phillies did re-sign Manny, Raul Ibanez's fairy tale 2009 first-half may have never occurred and the Phillies could have fallen short, maybe enough that they passed on trading for Cliff Lee at the trading deadline.  Lee set the bar that great pitching is what the Phillies are all about.

But, after the 2o08 season at the height of his popularity in Los Angeles,  Ramirez re-signed with the Dodgers for a whopping $45 million over two years, with an option for a third year.   I am not sure the Phillies would have ponied up that much money, but I am sure glad they did not.

Just a few months into the 2009 season, Ramirez tested positive for a steroid commonly used to promote fertility in women.  Ramirez was never the same.

One of my favorite funny moments in Citizens Bank Park was during the 2009 NLDS as Manny Ramirez took his first at bat for the Dodgers.

"You took steroids!" the Citizens Bank Park faithful taunted Manny with as he struck out.   Then, as the inning ended and the Dodgers took the field as if it was planned, this public service announcement played on the scoreboard informing fans of the dangers of steroids.  I remember even Dodger Matt Kemp looking up at the scoreboard and laughing as he jogged out to center field.

In the case of Manny Ramirez, steroids destroyed a great athlete.  I am just thankful that the Phillies never did acquire Ramirez back in 2008 so the Phillies World Series would not have been overshadowed by talk of cheating and the destructive nature of Ramirez's 2009 season would not have brought the Phillies down, even to the point of never achieving their current status.

It's a shame, because I'm not sure Manny even cares. 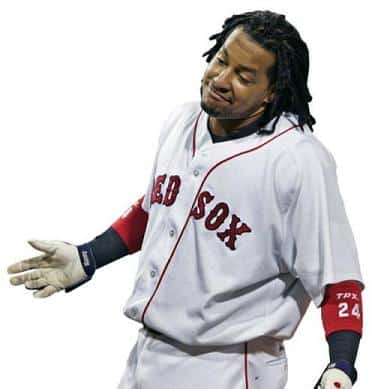