Why A Slight Lineup Switch Would Benefit Your Philadelphia Phillies 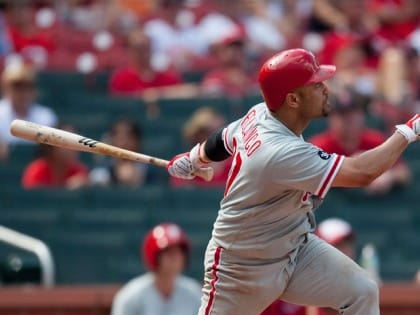 The Phillies bats certainly got off to a hot start this season. They scored over five runs in five of their first six games. This came as a surprise to the Phillies faithful, who expected the offense to take a major hit with the injury to Chase Utley and the absence of Jayson Werth. However, we may have jumped the gun in thinking that this type of scoring would keep up.

Since those first six games, the Phillies have played eleven more games. Their current record is a solid 11-6, good for first place in the NL East. Out of those eleven games, how many times have the Phils scored more than five runs? Just once.

Sure there are many factors to blame for the sudden cool down of the bats; Ben Francisco came back down to Earth, Raul Ibanez is beginning to leak oil already, and most notably, Jimmy Rollins has cooled off from his red hot start. How do I propose this is fixed? Switch Placido Polanco to the third spot in the linup and move J-Roll to second, or even back to first.

One could argue that even with a healthy Utley, Polanco is the most consistent hitter on the team. Nicknamed the "Hit Machine," Placido has earned the respect of the fans by seemingly always having a good at-bat, rarely striking out, and being a quality contact hitter. After hitting his second homerun of the week in yesterday's game, it appears the Polanco's elbow is pain free (knock on wood) and having him in front of Ryan Howard would be a great strategy. We all know the kind of power that Howard is capable of. Having our best pure hitter in front of our best power hitter would result in even better results (think of the Phillies combination of Utley/Howard a few years ago when Chase was injury free).  Polanco was meant to be a run producer. Through the first 17 games of the year he has 25 hits, and is tied (with Howard, of course) for the team high in RBI's with 15. Even after a hot start, Rollins only has 18 hits and one RBI.

That's right. Just one RBI. That's as many as John Mayberry, Michael Martinez, and Pete Orr have, and is less than Brian Schneider, our backup catcher who only has eight at bats all season and two RBI's. In fact, the only player on the Phillies 25 man roster right now who isn't a pitcher and has less RBI's than Rollins is Ross Gload, who has zero. Wow.

I would be okay with moving Rollins to the two hole in the lineup, or even moving him back to leadoff. He could bat leadoff like he has for most of his career, where he is familiar. Sure, he is far from your typical leadoff hitter, but this team has proven that they can win with him batting lead off. He still has the speed to make things happen when he's on base. If you're tired of having Jimmy leadoff and want to keep Shane Victorino there, then move Jimmy to second in the lineup. His speed will keep him out of double plays and he could even continue trying to bunt for hits like he has done successfuly a couple times already this season. It's well known that Jimmy would prefer to bat earier in the lineup as well.

This year's team is different than what Charlie Manuel is used to. We need to manufacture runs and play more of a typical National league game which requires moving runners, smart baserunning, and setting the table for our three and four hitters.

I think this small tweak in our lineup is an easy way to maximize our strengths without shaking things up too much. What do you think?