At least one Charlie Manuel believes in good process 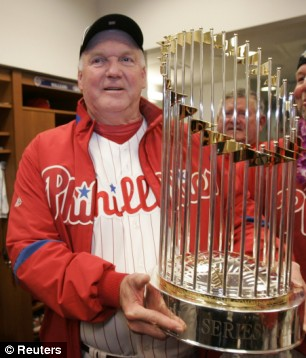 (On Tuesday night, Phillies' Manager Charlie Manuel chose to leave closer Ryan Madson in the bullpen, while the St. Louis Cardinals beat Danys Baez and J.C. Romero for a walkoff victory. In at least one alternate universe, events played out differently.)

BOTTOM OF THE NINTH INNING IN ST. LOUIS, PHILLIES AND CARDINALS TIED AT 1

Ryan Theriot never had a chance. Under typical circumstances, a plate appearance against Ryan Madson, the Phillies' northpaw closer, would be a tough situation for the Cardinals' right-handed hitting second baseman. Facing Madson, with the Phils' reliever pitching on three days' rest, was downright untenable. Theriot slumped back to the dugout, considering himself fortunate to have at least fouled off the second of Madson's three fastballs. At least his leadoff whiff had included a loud foul, Theriot consoled himself.

The easy move, the "conventional" move, would have been to hold Ryan Madson in reserve for a potential save situation. If the Phillies' mostly-absent offense could actually provide a second run, perhaps even one of the earned variety this time, Madson would finish up for the save. When it comes to road games, that's just "how it's done."

Phillies' Manager Charlie Manuel wasn't particularly interested in making the "conventional" move. Or the move that could be most easily-defended later. Manuel didn't let arbitrary statistics dictate his bullpen maneuvers. With the top of the Cardinals' order due to bat, he was going to use his best remaining pitcher. If it meant that the likes of Danys Baez and J.C. Romero would be called upon to protect a lead later, so be it. Manuel sure as heck wasn't going to lose with Madson still on the bench.

Cardinals' outfielder John Jay wasn't about to be intimidated by Ryan Madson's fastball. Jay had experienced success against Madson in the past. Well, maybe not a lot of success. In his only career plate appearance against Madson, Jay had flied out. But it was a long, loud out, a fastball driven to deep centerfield, a blast that would have left the ballpark under more favorable weather conditions. If the left-handed Jay had connected with that pitch a millisecond earlier, Madson's fastball would have landed in the right field seats. Jay would be ready this time. Madson twirled and fired, Jay coiled and swung, …and weakly dribbled a change-up to third base for the second out.

Charlie Manuel wasn't much for all the newfangled stats and theories. He based his decisions on what he'd seen. In his more than sixty years worth of watching baseball, he'd seen a lot. Above all the lessons Manuel had learned in those six decades was one: Focus on the process. Luck has a tendency to intersect with talent in beautiful and mysterious ways, or in hideous and terrifying ways, depending upon the point of view. Manuel knew to focus on the methodology behind his decisions, rather than the results, as he was well-aware that those results were largely outside of his control. Over the long run, Manuel believed that correct process would lead to success, at least more often than not. The results in the short run? Who knows? That's baseball. Or life.

Cardinals' slugger Albert Pujols strode purposefully to the plate, ready to send the fans home happy with a single swing. There was a reason that sponsorship of Pujols' baseball reference page cost a cool $1540. Actually, there were four hundred and fifteen reasons, with number four hundred and sixteen only a pitch away. But not the next pitch, as Pujols lined to left to retire the side.

Ross Gload called out on strikes.

“People judge too much by results. I’m just the opposite. I care about more than
results. I’d rather make a good pitch and give up a bloop single than make a bad
pitch and get an out.” – Greg Maddux