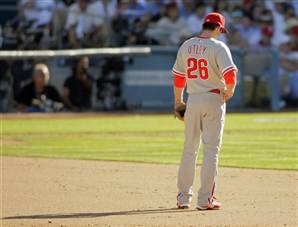 I’m sure this post won’t make me too many friends amongst fellow Phillies fans, but I feel like it needs to be said. I’ve seen countless people on Twitter mention how we should all vote for Chase as an all-star this year.  Hell, even the Phillies have been promoting to vote for Chase, as well as the rest of their starting eight, not taking injuries into consideration of course, down at the ballpark before home games.

In years past, I remember the outcry of complaints from Phillies fans when players like Barry Bonds, Dustin Pedroia, and Alex Rodriguez were voted in as all-star starters when they had missed most, if not all, of the action for the first half of the season. Sure, names like Bonds and A-Rod already reveal malice from Phillies fans, and rightfully so, but let’s not contribute to the problem that already lies with all-star voting. We're better than Yankees, Red Sox, and Giants fans!

Sure, we all want our hometown players to play in the game that is reserved for the game’s biggest stars. However, don’t we owe it to the great game of baseball to vote for the players who are most deserving of the feat? Players like Cal Ripken Jr., Ken Griffey Jr. and Tony Gwynn were voted in at the end of their careers as a sign of appreciation from fans, and cases like that are the only exception. If this was later in Chase’s career and he was ready to hang up his spikes after the 2011 season, then I would understand voting him in one last time as a way to show our appreciation for his career.

Someday that time will come for Chase. But it’s certainly not now.

After 36 games, the Phillies have a record of 24 and 12, which is a great start for a team that could make a pretty solid allstar team with the players on their injury list alone. However, in this blogger’s opinion, the only players truly worthy of an all-star selection to this point are:

I’m as big of a Chase Utley fan as there is, but someone who hasn’t stepped on the field yet this season, and won’t until June at the earliest, shouldn’t be considered today when voting for all-stars.

What Phillies players do you think are really deserving of an all-star vote?