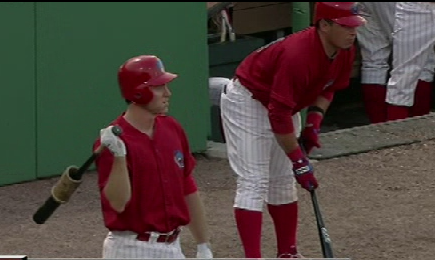 Have you ever seen three Major League players starting and playing the same game with a Single-A minor league team? No. It’s pretty rare. Chase Utley is staying in Clearwater after Roy Oswalt and Carlos Ruiz made a short rehab appearance Thursday night for the Single-A Threshers.

You did not even have to hear T-Mac or Wheeler. It was Jim Jackson and Ricky Bo. Pretty amazing duo and I could tell a lot of fans were enjoying their voices more.

Chase Utley had a great game going 1-2 with a homerun, a walk, strikeout and two runs scored.  However, the most important to us as fans and coaches was how Utley looked on the bases. It was an encouraging sign as he ran hard, stopped and started without noticeable discomfort and even slid into bases. More importantly there were not any signs of limping. Despite misfiring on a throw while trying to turn a double play, Utley looked comfortable fielding as well. Please, Chase Utley bring those lucky high socks back to Philadelphia.

Carlos Ruiz is expected to return to the Phillies tomorrow when they start their series in Braves country. Ruiz went 1 for 3 with a single and a run scored. Although Ruiz looked comfortable behind the plate catching, he wasn’t able to gun down Rainel Rosario stealing second.

Roy Oswalt induced two groundouts to start the second inning and then gave up a walk before recording a strikeout to end the inning. Oswalt got through the third quickly, but gave up two hits in the fourth. He induced a potentially inning-ending double play, but Utley’s throw was wide of first, allowing a run to score. In five innings, Oswalt allowed three runs, seven hits and struck out five.

Oswalt was getting his last work in before rejoining the Phillies for the weekend series with the Braves. Luckily Charlie Manuel had Oswalt's normal backstop behind the plate to see how his pitches were progressing.

After the game, Carlos Ruiz spoke about Roy Oswalts rehab outing. "I didn't see too much life in his fastball. I think the last innings were better, better location,"Ruiz said. "The breaking ball was there, and he was throwing more off-speed today. The fastball didn't feel like his fastball was there. He said he felt OK." Ruiz also said Oswalt's fastball, typically around 93 to 94 mph, seemed closer to 89 or 90, so Oswalt relied more on off-speed pitches.

I hope everyone enjoy the game and had fun watching our future. Oh by the way, Clearwater Threshers defeated Palm Beach Cardinals, 7-5.