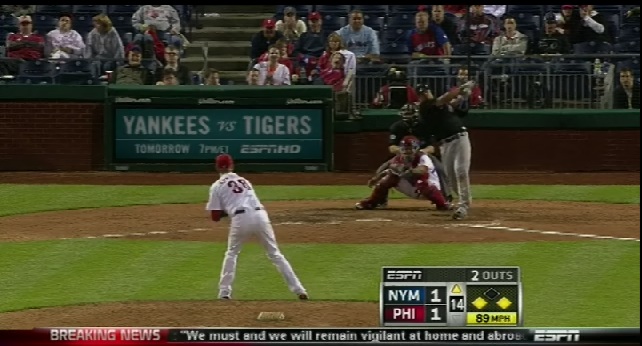 Our blogger Christina Angelos was supposed to do tonight's recap, but about 12:30 a.m., she begged for mercy, as she is set to take a final exam tomorrow morning at 8 a.m.  Okay – granted.

Fans at Citizens Bank Park got many more innings than they expected for their dollar, though the final result was very disappointing.

Phillies starter Cliff Lee did not have his best stuff, battling in the first inning with 34 pitches.  But, Lee hung in there and got sharper as the game went on, pitching seven innings and giving up one lone run in the fifth inning on a Carlos Beltran double that scored.

Charlie Manuel watched the final seven innings of tonight's game from the clubhouse as he came out to argue a third strike from catcher Brian Scheider, who was rung up after a very delayed appeal to third base umpre

The Phillies got their one run off of a Ryan Howard RBI single that scored John Mayberry Jr.in the eighth inning.

The sold-out crowd began chanting, "U-S-A! U-S-A!" around 10:45 p.m. as news broke that the United States had killed Osama Bin Ladin, which caught the attention of the national broadcasters.

Phillies castoff Ronny Paulino, fresh off his suspension for performance-enhancing drugs, went 5 for 5 including an RBI double in the 14th inning off of Kyle Kendrick which put the Mets up 2-1.

Kendrick gave up just that one run in three innings of work and took the loss as the Phillies were unable to score in the bottom of the 14th.

That is pretty much it, other than a whole lot of zeros and missed opportunities.   The Phillies are off on Monday before beginning a three-game series at home against the Washington Nationals. 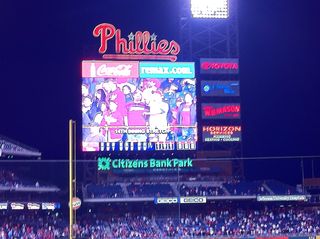 Gload Away from the Team
Already being down a pitcher in this extra-inning game, it is very notable that Cole Hamels got a pinch-hitting opportunity, but Gload did not.   Gload left the team to be with his family after his grandfather passed away.