Eagles Flyers Phillies Sixers About Us Write For Us
Series Preview: Phils and Mets
Mets Avoid a Sweep; Phillies Fall 9-5

Mets Run All Over Hamels, but Phillies Prevail in the End 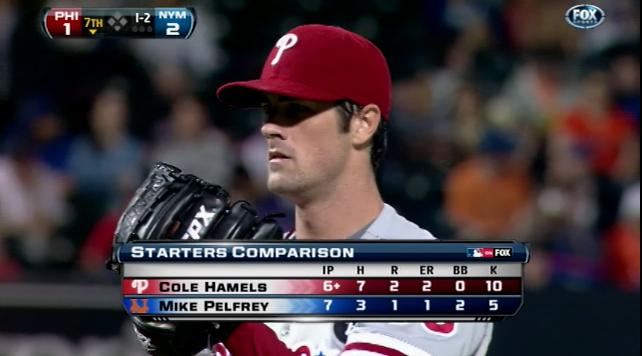 Cole Hamels must have been easy to read for the New York Mets' coaching staff, because in the early going, the Mets were running all over Hamels and Carlos Ruiz.

Just 2 2/3 innings in, the Mets had stolen five bases.   Two of those bases were stolen by Jose Reyes, and each time led to a Mets run.

The Phillies got one of them back on a Raul Ibanez RBI double in the 4th.

Despite the extra bases given to the Mets, Hamels was sharp as he went seven innings, giving up just the two runs and striking out ten.  He exited the game having retired 11 in a row, as Ross Gload pinch hit for him in the seventh inning.

Pelfrey went 7 2/3 strong innings, but was pulled for the left-handed Mike O'Connor to face Chase Utley as Jimmy Rollins hit a two-out single.

But, Pelfrey's outstanding effort went to waste for the Mets.  The lefty-vs-lefty matchup failed, as Rollins stole second base and Chase Utley singled to left field to drive in Rollins to tie the game.

Utley promptly stole second and advanced to third base on an errant throw by Ronny Paulino as Jason Isringhausen came in to relieve.  Isringhausen walked Polanco, and lefty Tim Byrdak was summoned to face Ryan Howard.

Howard lined a double into the right field corner, scoring both Utley and Polanco to give the Phillies a 4-2 lead and putting Cole Hamels in line for the win.

Jose Contreras breezed through the Mets with a 1-2-3 eighth inning before the Phillies added one in the top of the 9th as Domonic Brown doubled and Ben Francisco hit a pinch-hit single to drive Brown in to make it 5-2.

Ryan Madson nailed down the 9th for his 11th save in 11 opportunities.