Phillies’ Brian Schneider Likely Headed to the D.L….Now What? 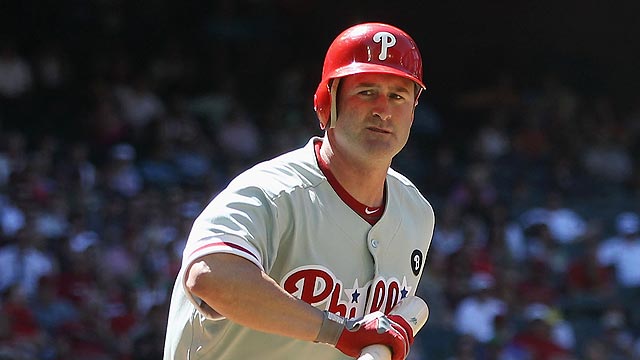 In the Phillies 5-3 win over the Florida Marlins on Wednesday, Phillies catcher Brian Schneider came up limp as he rounded third base, and was subsequently replaced by Dane Sardinha.

Ryan Lawrence of the Delaware County Times is reporting that Brian Schneider is likely headed to the disabled list.   Now, starting catcher Carlos Ruiz is already on the disabled list, so what do the Phillies do?

On a positive note is that Ruiz played an extended spring training game today and is close to returning.   But what about the time until then?  What are the options?

Erik Kratz.   Kratz, like Sardinha, is a minor league free agent without out options to the minor leagues.  If Kratz came up, both he and Sardinha would have to pass through waivers to return to the minor leagues, and the Phillies would risk losing them to another team perhaps in need of a stopgap solution at catcher.   At AAA Lehigh Valley, Kratz is hitting .259 in 54 at bats.

Joel Naughton.  The Aussie Naughton hit AAA when Dane Sardinha came to the big leauges.   In just 10 at bats since joining AAA Lehigh Valley, Naughton is hitting .300, or 3 for 10.  To add Naughton to the roster, the Phillies would have to make room on the 40 man roster.  Naughton would then have options to the minor leagues and could stay in Philadelphia for a short time.

Tuffy Gosewich.  A popular name among bloggers, Gosewhich may make sense for a couple reasons.  For one, Gosewich has been around the last couple of Spring Trainings and would not be totally new to the major league pitching staff.  Secondly, if the Phillies only need a catcher for a few days until Ruiz comes back, they may prefer to grab someone that they may simply just option to the minors.   Gosewich is hitting .271 in 70 at bats at AA Reading.

To make room for Naughton or Gosewich, shortstop Brian Bocock, recently activated from the discabled list, seems to serve no purpose on the 40-man roster and could be removed.   Either catcher could simply be optioned to the minors, but would continue to occupy a roster spot.