Phillies Pull Off a Wild Win in Atlanta 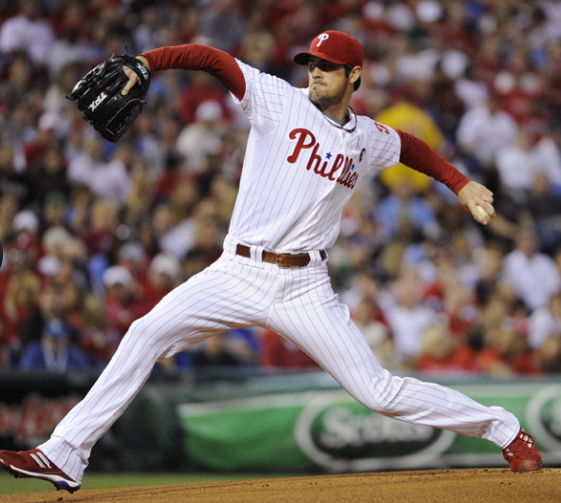 The night started off promising for the Phillies – they jumped out to an early 3-0 lead on the road, had one of their four aces on the mound, and were facing the Braves bullpen after only two innings. Despite having much in their favor, the Phillies did anything but cruise to an easy win.

After Jimmy Rollins flied out to center to lead off the game, five of the next six Philadelphia batters got hits off of Atlanta starting pitcher Brandon Beachy. The inning was highlighted by a Ryan Howard three-run bomb to center field. Even though the Phillies batted around in the first, those were the only runs they could get.

Atlanta quickly responded with a run in the bottom of the first. Martin Prado continued his assault at the plate with a single to right, his first of three hits on the night. Cole Hamels then sailed a throw following Nate McLouth's sacrifice bunt (his first of three!) over Howard's head. Chipper Jones' single in the next at-bat allowed Prado to score and cut the Phils' lead to two, but Hamels escaped the inning with no further damage.

A pitcher's duel broke out after the first inning. Cristhian Martinez relieved Beachy in the top of the third after he suffered a left oblique strain. Martinez not only threw four innings of scoreless, hitless ball for the Braves, but he tied the game with his first career double in the bottom of the fifth. The ball was smoked past Placido Polanco at third, who was playing on the edge of the infield grass.

Atlanta briefly took the lead in the bottom of the sixth with a two-out rally and the bottom third of the order at the plate. Alex Gonzalez singled up the middle, and moved to third on a Joe Mather ground-rule double. Hamels then deposited a wild pitch to the backstop with pinch-hitter Diory Hernandez at the plate, which allowed Gonzalez to score.

The Phillies quickly tied the game in the top of the seventh, thanks in large part to home plate umpire David Rackley. Jimmy Rollins doubled to right with two outs, which allowed Victorino to bat. Down in the count 0-2, Eric O'Flaherty appeared to catch Vic looking. Rackley waved his right arm out, McCann left the field, but strike three was never called. With a second chance, Victorino lined a ball to center and tied the game.

The young Phillies bullpen came up huge in the bottom of the seventh. With the bases loaded and one out, Michael Stutes was brought on to replace the ineffective J.C. Romero. Stutes struck out Dan Uggla on a nasty slider, even after the second-baseman smashed the previous 2-1 slider foul. Charlie Manuel continued playing bullpen roulette and called on Antonio Bastardo to face Freddie Freeman. After falling behind in the count 3-0, Bastardo threw three straight fastballs to strike out the rookie and end the inning.

Philadelphia responded in the top of the eighth after a rejuvinated Raul Ibanez squeaked a ball through the right side to score Howard from second. The throw from Mather beat Howard to the plate, but McCann could not corall the short-hop and Ryan slid in safely. Vance Worley pitched a solid eighth inning, and Ryan Madson closed the game by again striking out Uggla with the game-tying run on second.

The Phillies improved their major-league best record to 25-12 with the win. Joe Blanton takes the mound at 1:10 PM tomorrow against Jair Jurrjens in game two of the series.