Eagles Flyers Phillies Sixers About Us Write For Us
David Einhorn's Minority Stake in Mets Assures Mediocrity for Years to Come
Mets Run All Over Hamels, but Phillies Prevail in the End 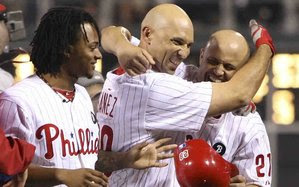 I haven't written anything about Fred Wilpon's recent inflammatory comments about the Mets yet. Maybe I'm the only one who hasn't. Ted Berg wrote a great reaction piece on his blog, as did Aaron Leibowitz. But I've been thinking about it over the past couple of days, as I wonder exactly what to say. On one hand, who am I to criticize what a man says about the team he owns? Yet on the other hand, some of the things he said make me shake my head in embarrassment. If you haven't heard Wilpon's comments about the Mets yet, here's a refresher. The Mets owner sat down with Jeffrey Toobin of the New Yorker a few weeks ago, and the piece was published earlier this week. It appears to be an attempt by Wilpon to save face after the Madoff disaster and try to get back in the public's good graces. But somewhere along the way, Wilpon let his guard down while watching the end of a terrible Mets loss, when they fell to their low point on the season of 5-13. Toobin was able to get Wilpon to say things that a radio caller would say. Among them, that Jose Reyes "thinks he’s going to get Carl Crawford money" and that "He’s had everything wrong with him. He won’t get it." Maybe he's right. I personally don't think Reyes is worth over $20 million a year, either. But why would you say that publicly? He's effectively destroyed GM Sandy Alderson's poker face when it comes to potential trade negotiations. Why say that at all? What positive can come out of that? He was just getting started. Referring to David Wright: "He’s pressing. A really good kid. A very good player. Not a superstar." The same non-superstar that the Mets promote like a superstar? The one that we're supposed to fill the ballpark to go see? What's the difference between an All-Star and a superstar? It's nitpicking to classify. Wright is a perennial All-Star who, despite taking a step backward in his game since 2009, is still one of the National League's best. Not only that, but he's one of the greatest homegrown players in Mets history, and still has a few years left on his deal. What is the benefit of saying he's not a superstar? Surely Wilpon will lower ticket prices because there's no superstars on display, right? I doubt it. But what he said about Carlos Beltran is what gets to me. “We had some schmuck in New York who paid him based on that one series,” Wilpon said, referring to himself as a shmuck for presumably overpaying Beltran after his incredible 2004 NLCS. “He’s 65 to 70-percent of what he was.” Now, of course Beltran has been hampered by chronic knee injuries over the past few years. Clearly he has lacked the speed and stolen base threat that he was earlier in his career. But to call him 65-70% of what he once was? I think that's over the line. It's bad enough that there's a contingent of Mets fans who have never warmed to the gallant Beltran, but to hear the owner who brought him here say that? It's embarrassing on so many levels.

THE OUTLOOK- Rivalry? Yeah ok. But hang on there: they do play very hard against us. With that said, the Phillies are already well ahead of the Mets, and come in off of series wins against 2010 playoff teams Texas and Cincinnati. This isn't a "big series," but it's sure as hell fun to see our hated rivals again.
THE PREDICTION-
Suddenly we have all four aces and Utley and Brown playing. We look like we can hit again (even if both of them haven't much). I'm feeling good.
PHILLIES 2 OF 3.