Should the Phillies Pick Up Recently Designated Milton Bradley? 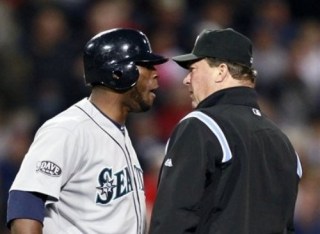 Bradley has long been considered a very talented player, but is known for his temper and other off-field issues.  I feel that these would not be a problem on the Phillies.

What would be a problem Gleeman points out here:

He batted .205 with a .641 OPS in 73 games last year and is hitting .218 with a .669 OPS through 28 games this year, which would be awful production from a choir boy with a great glove, let alone a pain in the ass whose best position is designated hitter.

Gleeman makes a great point; Bradley has not been productive in the least while continuing to be a clubhouse nuisance; he also references Bradley's poor fielding.

Ben Francisco in his first season as a Phillies starter is putting up below-average numbers as a right-fielder.

NBC Hardball Talk's Craig Calcaterra, though, (who could be joking) thinks that Bradley would make sense for the Phillies:

If Bradley wanted to accept a minor-league contract with no obligation such as Luis Castillo did, I would not be opposed, but it would take raising some eyebrows at AAA for the Phillies to try to add him.  He is simply not better than what the Phillies  have right now, and until he proves such I would not put any stock into Bradley.