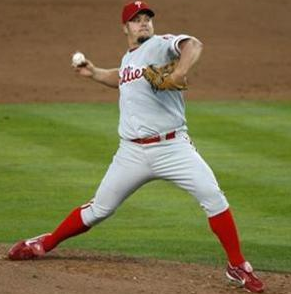 According to multiple sources, Joe Blanton and Shane Victorino are likely headed to the DL tomorrow.

Ruben Amaro said that an MRI revealed a Grade 1/Grade 2 strain in Victorino's hamstring. While the Phillies have tried to avoid this scenario, sitting on the bench for the week (minus a pinch hit appearance where he sacrifice bunted) hasn't sped up the healing process. Unfortunately, the DL move would only be retroactice to May 18th because of the pinch hit appearance.

As every Phillies fan knows by now, Joe Blanton was scratched from tonight's start with right elbow soreness, and will likely also hit the DL tomorrow. Blanton has made two starts since coming off the DL a couple of weeks ago. Unfortunately, it seems as if Blanton was taken off the disabled list too soon and never fully recovered. Expect Vance Worley to be called up to take his spot in the rotation again, although no formal announcement will be made until tomorrow.

In place of Victorino, Amaro added that Domonic Brown is not likely an option to take Victorino's roster spot. While Brown will likely be called up this season, Amaro didn't sound optimistic that his promotion would occur tomorrow. Michael Martinez seems to be the likely candidate for more playing time in center field. Pure speculation, but Delwyn Young or Cory Sullivan could be making their Phillies' debuts sometime in the near future.

Updates to be provided tomorrow.