Eagles Flyers Phillies Sixers About Us Write For Us
Order a Custom Dodgers Jersey! Just Don't Make Fun of Bankruptcy...
Then and Now: Pavel Brendl 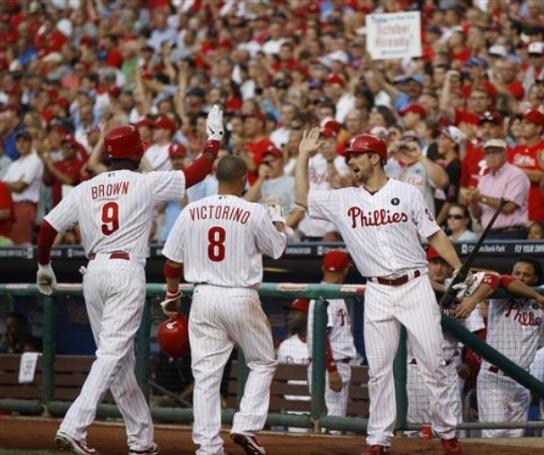 I can't put into words how truly masterful Cliff Lee pitches. Cliff had a no-hitter going into the sixth inning tonight before giving up a single to Marco Scutaro. Five scoreless innings for Cliff to tack onto his current career-high streak.

Domonic Brown backed up Cliff in the second inning with a two-run bomb to the Phillies bullpen, 400+ feet away from home plate. Cliff also helped his own cause flying out to deep left field to score Domonic from third in the bottom of the fifth inning.

In the bottom of the sixth, Shane Victorino launched a two-run home run to right field to push the Phillies' lead to 5-0.

Cliff Lee allowed just the second hit of the game for the Sox in the eighth, a double to Darnell McDonald. However, Cliff retired the side stretching his scoreless innings streak to 31.

In a 5-0 game, Cliff came back for the ninth to finish what he started, and he did just that. He pitched his third consecutive complete game shutout. The last Phillie to do that? Robin Roberts in 1950. A few stats: In the month of June, Cliff Lee has allowed one earned run in 42 innings pitched.  He is now 17-3 in interleague starts, and is currently riding a scoreless streak of 32 innings.

Vance Worley takes the ball tomorrow night for the Phils against John Lackey. It'll be tough to top tonight's victory.