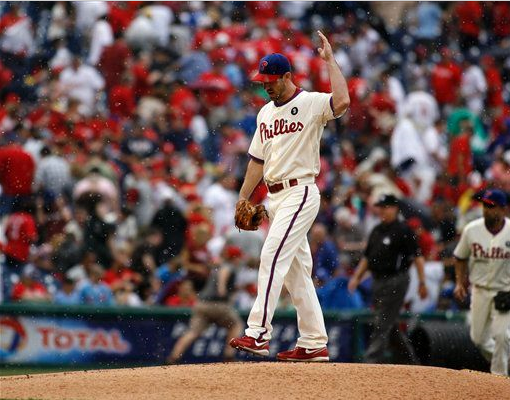 Cliff Lee toed the rubber, grasped the ball, and before he could even toss the first pitch of the game, the rain came down causing a 32 minute rain delay. Cliff wasn't pleased with the weather, and you could definitely tell by his reaction to the sudden downpour.

When the game continued, the Phillies jumped on an early lead in the first inning thanks to Chase Utley's two-run double off of the left field wall. The Cubs came around in the third inning when Montanez singled to score Darwin Barney.

In the bottom of the seventh, Shane Victorino scored an insurance run off of Ryan Howard's single, and Ryan scored from first off of Raul's double, which Blank DeWitt dove for and missed. 4-1 Phillies.

The Phillies weren't done just yet. In the eighth inning, Shane Victorino singled to score Carlos Ruiz from third, followed by Chase Utley's second home run of the season which gave the Phillies a 7-1 lead. Four RBI's this evening for Chase.

Young, filthy Antonio Bastardo came in to seal the deal against the Cubbies and retired them in order to help the Phillies go on to win. Cliff Lee took the win for his sixth of the season, and Roy Oswalt will look for his fourth win tomorrow at 1:35 against Doug Davis who is 0-5 on the season with a 6.38 ERA.