Double Win in Doubleheader for the Phillies 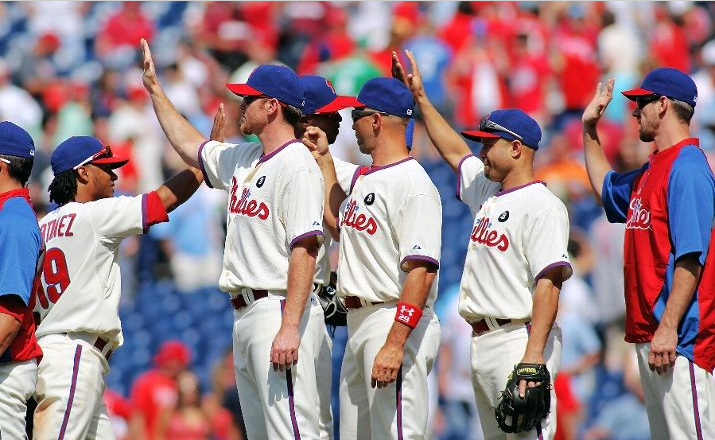 After last night's 9-1 victory over the Marlins, the two teams had two games to play today, the first was a make up game from April 16th's washout. Kyle Kendrick pitched tremendously in the first game, allowing just one earned run, a home run to Logan Morrison in the first inning, and didn't allow another hit until the seventh inning. He struck out five and walked one in seven quality innings pitched.

Ryan Howard's RBI double scored Victorino in the first inning which tied the game at one. In the second inning, Jimmy Rollins singled to score Ben Francisco, but this game was busted wide open in the third inning after Wilson Valdez cleared the bases on a triple. Following Kendrick's outing, J.C. Romero pitched a scoreless eighth and Danys Baez a scoreless ninth, to secure the Phillies' 8-1 lead. This was their fifth straight win.

Game two did not go as swimmingly as game one for the Phillies. It looked promising from the get-go with Halladay starting against Anibal Sanchez. Halladay is tied for league wins and Sanchez has won six of his last decisions. Chase Utley is 11-25 against Sanchez.

Like the previous two games, the fish attacked first. Hanley Ramirez scored on a groundout, and Gaby Sanchez went deep to right-center to give the Marlins a 2-0 lead. Chase Utley doubled to deep left to score Jimmy Rollins in the bottom of the first, cutting the Marlins' lead down to one run.

In the fourth inning, Dobbs and Lopez scored on John Buck's double to center, which was misplayed by Ibanez. 4-1 fish. Utley provided the second run for the Phillies scoring Shane Victorino from third on a triple which split the gap in right-center.

You could argue that Roy Halladay didn't have his best stuff tonight. But, after striking out the side in the seventh, and having retired 11 straight at that point in the game, he was looking more like himself. Doc was finished after seven innings. He allowed four earned on six hits, striking out eight and walking none. Young, filthy Antonio Bastardo retired the first two batters in the eighth before Michael Stutes came in to retire Stanton on one pitch.

Stutes stayed in for the ninth inning and retired the side, but not before allowing a single and hitting a batter. With Leo Nunez in to close it for the Marlins, Carlos Ruiz and Ross Gload singled before Victorino doubled to score two and tie the game. Ryan Madson got out of a jam in the tenth, striking out Stanton to end the inning, stranding two.

With Ryan Howard on second and Dom Brown at first, Carlos Ruiz ripped a single up the middle which was misplayed by Bonifacio, allowing Ryan Howard to score easily. Phillies win 5-4 in 10 innings.