Eye-Opening Farmhand Brian Gordon Opts Out of Contract; Will Start for the Yankees

Posted by Frank Klose with contributions from Tony Galante 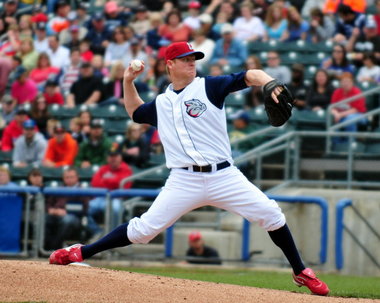 Just two days ago, Bob Brookover wrote this piece about the Phillies' Brian Gordon who went from extended spring training pitcher, to temporary Iron Pig, to one going 5-0 with an International League-best 1.14 E.R.A.

Why did Gordon draw such attention?  Well, Gordon was an outfielder in 949 minor-league seasons over 15 years before he asked for an opportunity to pitch in 2008.   In 2011, he found success.

In fact, he pitched so well for the Iron Pigs this year that when he had an opportunity to opt out of his contract today, he did so, and will start for the New York Yankees this week.

The Yankees were already down Phil Hughes before Bartolo Colon left his last start with a hamstring injury.

The Lehigh Valley Iron Pigs' rotation is in a bit of a flux itself, as Nate Bump left tonight's game with an injury, Gordon has opted out, and Vance Worley likely will be called up to pitch on Saturday night at Seattle.  At least Drew Carpenter is still there…