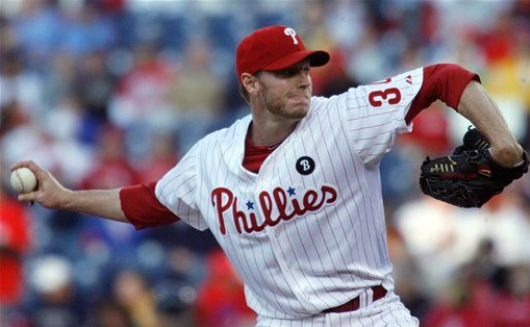 Roy Halladay, who is 0-3 lifetime against the Cubs, took the bump tonight against Carlos Zambrano who has won four of his last five starts against the Phillies. It would appear that Shane Victorino, who switched spots in the lineup with Polanco tonight, has the best stats against Zambrano, going 5-10 lifetime.

The slight lineup change seemed to be effective in the first inning, with Jimmy Rollins and Shane Victorino both reaching. Chase Utley grounded into a fielder's choice, and Jimmy was caught in what was possibly the longest rundown I have ever witnessed, and it moved the runners into scoring position for Ryan Howard. With Shane on third, Howard grounded out to give the Phils a 1-0 lead, and that's all they would get out of the first inning.

How 'bout that Brown kid? He launched a two-run homer to right field to give the fightins a 3-0 lead in the second inning. Not a bad way to get out of a slump!

As for Roy Halladay, he was breezing through the Cubs' lineup, shutting them out through the first six innings, allowing only six hits, striking out seven, and walking none on 93 pitches.

Jimmy walked again in the seventh, Chase Utley was intentionally walked, and Ryan Howard also drew a walk to load the bases for Polly in the five-hole, who ripped a grand slam to left field, giving the Phillies a 7-0 lead. It was Polly's second grand slam of the season, and 100th career home run. I like this lineup, Charlie, don't change it.

Zambrano's night was done at that point, he tossed 128 pitches in six and 1/3. The Phils still threatened in the seventh, with two on, but Ben Francisco (pinch hitting for Doc) struck out to end the inning. With Ben Fran in, Doc's night was done after seven, keeping the Cubbies at six hits, and striking them out nine times. He tossed 106 pitches, 73 for strikes.

Jose Contreras, whose arm isn't 100% yet and is experiencing neck soreness came in for the eighth, and loaded up the bases on a double and two walks before allowing a single to center which scored two. J.C. Romero replaced him with one away, and allowed two hits and walked one, allowing three to score before Michael Stutes came in and retired the side, striking out one. Incredibly terrible inning for Contreras and Romero, who are at fault for cutting down the Phillies' lead to two runs.

Stutes remained in the game for the ninth inning, Ryan Madson was not available after pitching in four of the last five games, including last night's which resulted in his first blown save of the season. Michael walked the lead off man, but struck out Starlin Castro, followed by Carlos Ruiz gunning down Darwin Barney at second. Strikeout-throwout, and in comes young, filthy Antonio Bastardo to strike out Carlos Pena on three pitches. Phillies win, 7-5.

Halladay is the first starter in the majors to reach nine wins this season. Cliff Lee will go for win number six on the season tomorrow at four against former Tampa Bay Ray Matt Garza who is 2-5 with a 4.07 ERA.