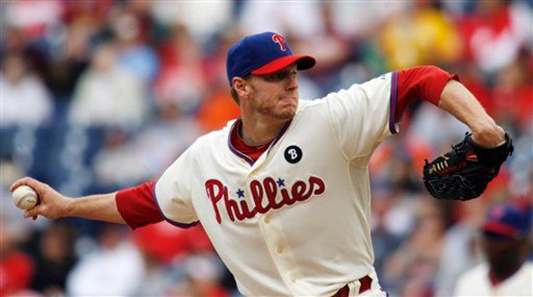 Thanks to our very own Christina Angelos, I get to write the recap today and was told to do so in the ninth inning, so I'll make this short and sweet.

Roy Halladay pitched his 63rd career complete game striking out four, and allowing one earned run on eight hits. He is the second pitcher in the National League to reach ten wins. Jair Jurrjens was the first.

Jimmy Rollins went 4-4 today scoring two runs. The Phillies' bats backed up Halladay in the first thanks to Victorino who singled to score Rollins, and Howard who grounded into a double play which scored Polanco. In the bottom of the fifth, Ben Francisco reached on an infield single with the bases loaded to make it a 3-1 game.

The Phillies defeated the Athletics 3-1, and will host the Boston Red Sox starting Tuesday night with Cliff Lee taking the mound against Josh Beckett.