Howard, Utley, Rollins and Brown All Go Yard in 9-1 Win Over Marlins 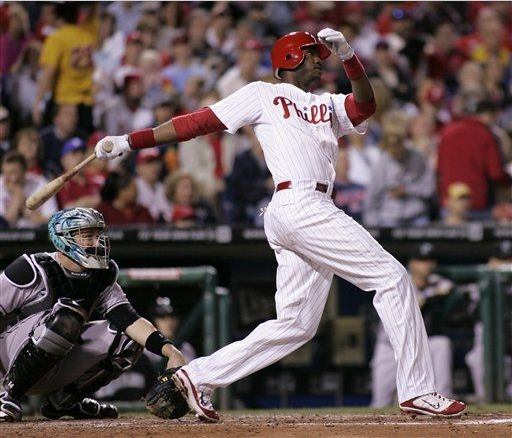 The Phillies and Marlins start a four-game series including a day-night double header on Wednesday, June 15. The day game is being made up from April 16th's game which was rained out. Tonight, Cole Hamels took the ball for the Phils, and Chris Volstad took it for the Fish.

After a rain delay which pushed the game to an 8:20 start, the Marlins got to Hamels in the first inning, with Bonifacio and Morrison both hitting singles before Gaby Sanchez grounded out to score Bonifacio. Early 1-0 lead. However, the next 17 Marlins would not reach base.

The Phillies however, well, they absolutely murdered Chris Volstad. In the first inning, Ryan Howard crushed a two-run home run to left field, an oppo boppo from the big man. In the bottom of the third, it was Chase Utley's turn who hit one right into Utley's corner, scoring Shane Victorino, 4-1 Phillies. Bottom of the fourth, and Dom Brown gave the Phils a 5-1 lead on a solo shot to right field.

Victorino singled and Utley doubled in the fifth before Polanco popped up a sacrifice fly to score Victorino, 6-1 Phillies. In the sixth inning, Carlos Ruiz singled and Jimmy Rollins sent a home run ball to right-center to put the Phillies up 8-1.

With Edward Mujica in for Chris Volstad in the seventh inning, Domonic Brown absolutely killed a baseball (I'm surprised it didn't burst into pieces) to the second deck in right field, 9-1 Phillies.

In the eighth inning following a walk to Wes Helms, Cole Hamels left the game with what was later reported to be "tightness in his mid-back." David Herndon finished off the inning for him, striking out two.

With a solid 9-1 lead in the ninth, David Herndon closed it out. Cole Hamels took the win in this five home run game, and for the first time this year, the "four aces" have won consecutive starts. Cole Hamels and Roy Halladay are the only starters in the National League with nine wins on the season. Doubleheader tomorrow, Kendrick takes the mound at one.