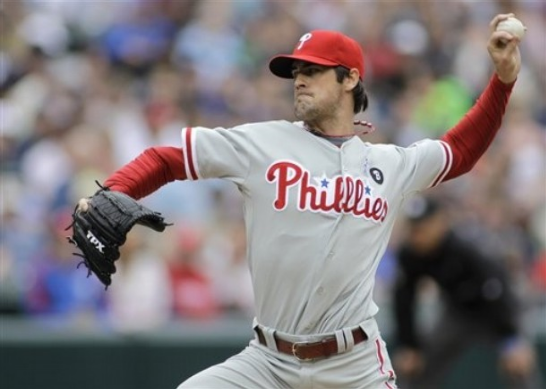 In the rubber match of this Mariners-Phillies game in Seattle, Cole Hamels went for his tenth win of the season against Jason Vargas who is currently 4-4 on the season with a 4.14 ERA. Hamels started today's game with 995 career strikeouts, and is currently tied in first with Halladay and Jair Jurrjens of the Braves with league wins at nine. Cole's ERA of 2.37 leads the Phillies' starters, and is the second lowest in the National League behind Jurrjens.

The Mariners were being two-hit by Cole Hamels going into the sixth inning, and by that point, Hamels had struck out six batters. Three in the second and two in the fourth, which included his 1,000th strikeout, the victim being Miguel Olivo. The Phillies were also being two-hit by Vargas. It wasn't pretty.

Hamels got into some trouble in the sixth, allowing a single to Ichiro Suzuki, and a single to Justin Smoak which scored Ichiro. 1-0 Seattle. In the seventh inning, Dustin Ackley tripled to lead it off, and scored on Adam Kennedy's single. At 118 pitches, Cole Hamels was taken out of a 2-0 game. Jose Contreras came in and got Chone Figgins to ground into a double play to end the inning.

David Herndon pitched a scoreless eighth allowing a single, intentionally walking Smoak, and ending the inning on a double play.

The Phillies' offense could not come around for the ninth inning despite Ryan Howard's two-out single, and they were three-hit by Jason Vargas. It was Vargas' fourth complete game and second career shutout. Cole Hamels took the loss for his third on the season.

Off day tomorrow for the Phils. They'll travel to St. Louis for a three-game series starting Tuesday. Halladay will go against Kyle McClellan.