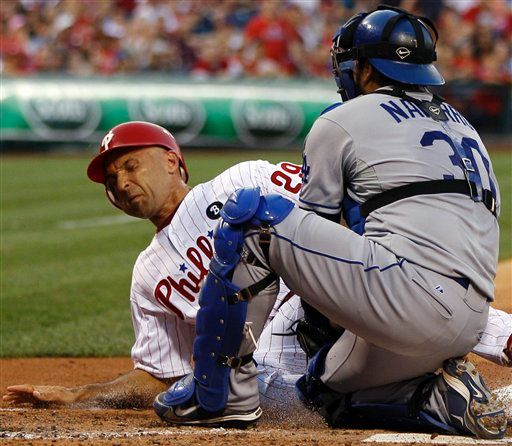 Oh, boy. What an interesting game this turned out to be. Roy Oswalt against Rubby De La Rosa, who was making his first major league start. Roy hasn't won a game since April 21 in San Diego, and Rubby has yet to win a game as a starter in the majors. Oh, how this game was odd.

The Dodgers struck first in the second inning when Dioner Navarro singled to score Matt Kemp from second. De La Rosa was having some issues in the bottom of the second, he walked the first two batters and allowed a single before striking out Oswalt. He got Victorino to ground into a force out which jammed Carlos Ruiz at home. But, he walked Polanco which scored a run for the Phillies. Tied game.

Roy Oswalt also had a tough time, and allowed three more runs to score in the third inning off of three hits and a walk. The Dodgers had hopped on a 4-1 lead.

Little Roy only pitched through six innings tonight. He allowed four earned runs off of eight hits, walking two and striking out one. This was his sixth straight start of striking out three or fewer batters. Keep in mind that his health has nothing to do with it.

Chase Utley tripled in the seventh inning to score Shane Victorino from first, making it a 4-2 game. Michael Stutes came in to pitch the eighth, and after walking Andre Ethier, he allowed a two-run homer to Matt Kemp. 6-2 Dodgers.

David Herndon pitched a scoreless ninth and got out of potential trouble with Tony Gwynn on the bases; he tried for third on Dee Gordon's groundout, but Wilson Valdez made a hell of a play twisting and sliding to third to tag out Gwynn. Willie is the definition of versatile.

Jimmy Rollins came into the game to pinch hit in the ninth inning to help the Phils come back and win. But, sadly, the side was retired by Javy Guerra, and the Dodgers went on to win, 6-2.