If you're a female phan chances are you've been pining over Chase Utley for the better part of seven years now. You've been making vodoo dolls of Jen Utley, hoping that Chase would realize you two were meant to be together. You were probably devestated to here the she woman is with child. Well never fear, female phans, the forces that be have taken care of your deep, dark, unspoken desires. 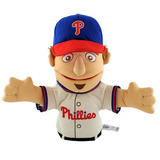 If you're not into Utley, never fear, Bleacher Creatures have you covered. There is a Roy Halladay hand puppet, so you can fist the best starter in all of baseball, or a Ryan Howard hand puppet if you like sexual DARK chocolate. If you're into the more kinky stuff, as I know some of my Twitter followers are, Bleacher Creatures have a Phanatic handpuppet too. I'm pretty sure, however, that messing around with the Phanatic is illegal in 48 states .

Check out the Bleacher Creatures site today to buy yours. Make sure it's in the bedside table with all your other toys.

View All Posts By PhillieBot

View All Posts By PhillieBot