Oswalt Departs With Tightness in His Back; Career Ending? ‎ 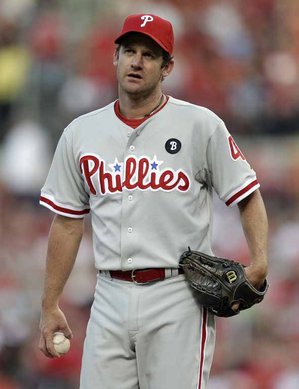 Philadelphia Phillies pitcher Roy Oswalt was hit around by the Cardinals in Thursday's loss. He allowed four runs: a homerun, only striking out one batter. He left the game with back spasms in the second inning.

According to a report on CSNPhilly.com, Oswalt has stated that he has been bothered by the condition for a while. He says that it hurts when he sits down, stands up, walks, sleeps, and pitches.

He also said that he doesn't know how much longer he'll pitch, if ever again.  “You throw as long as you can and when you can’t throw anymore you don’t,” Oswalt said. “Hopefully it’s not to the point where I can’t throw anymore. If it’s at that point, you just have to accept it.”

He had been planning to pitch through the pain but said that he realized that he has become a liability to the team.  He is scheduled to have an MRI on Monday.