Phillies Drop Another Game In the Series, Fall 6-3 to the Pirates 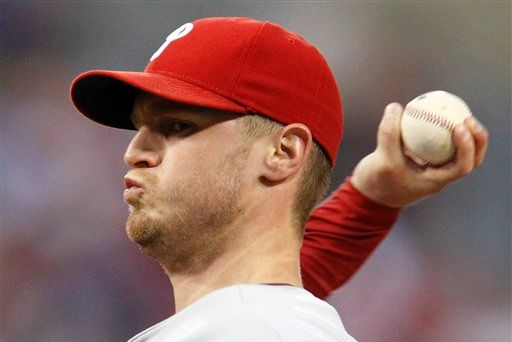 That face. Look at that face. Yeah, I also wish that it was Vance Worley's. After yesterday's extra-innings loss to the Bucs, the Phillies put Kyle Kendrick on the mound against Charlie Morton who "reinvented himself."

Luckily for Kyle, the Phillies hopped on a 1-0 lead in the first; Ryan Howard grounded into a fielder's choice scoring Jimmy Rollins from third. Rollins in his first at bat had fouled off a pitch off of his right knee, and was seen limping around the bases, and was clearly in pain. He was later taken out and was reported to have a contusion on his right patella. So, he has a bruised knee.

In the bottom of the first, the Pirates came back, starting with Andrew McCutchen's RBI single which scored Jose Tabata, last night's hero, and McCutchen scored on Lyle Overbay's double. 2-1 Pirates…arrrrrgh.

Kendrick pitched through five innings allowing four earned runs off of eight hits, striking out and walking none. Mike Zagurski pitched a scoreless sixth, followed by J.C. Romero who allowed Matt Diaz to score on McCutchen's double which gave the Bucs a 5-2 lead in the seventh. Romero walked two and struck out two in the inning.

Scary moment in the top of the eighth, Shane Victorino lined a ball into the first row above the Phillies' dugout which struck a child. The game was delayed while the kid was escorted out of his seat and taken to be checked out. Shane, along with the rest of PNC Park looked on as the kid left, and you can only imagine what Shane was feeling standing at the plate.

Danys Baez pitched the eighth inning allowing a run to score on a wild pitch, which gave the Pirates a four run lead going into the ninth. The Phillies loaded the bases in the ninth against Hanrahan for Placido Polanco who singled to score Raul Ibanez. Sadly, that's all that would come of the quick rally, and the Phils went on to lose 6-3 after Hanrahan got Chase Utley to pop-out.

Rejoice, Roy Halladay pitches tomorrow! Doc against Jay McDonald who is 3-3 with a 4.85 ERA this season. 1:35 gametime.