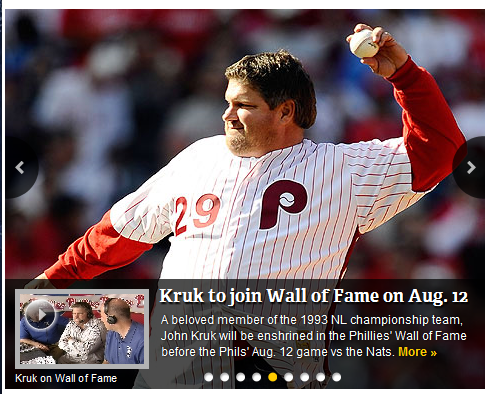 The above image is currently on the front page of Phillies.com

I saw this image on the Phillies.com homepage, and it someone struck a nerve, as it does when I see a Kruk Cooperstown Collection jersey like this one on eBay.

You see, John Kruk went through a lot of uniform numbers with the Phillies.

When Kruk was first traded to the Phillies in 1989 for Chris James, he was assigned number 11.

Prior to Spring Training in 1992, Kruk showed up in spring training in a number 28 jersey, and soon thereafter traded it to Mitch Williams for a case of beer.

You see, Kruk indeed did wear the old style uniform, but only in 1989, 1990, and 1991 before the Phillies changed uniform styles to their present brighter red in 1992.  Kruk never did wear the powder blue either, as the powder blue was replaced with gray in the 1989 season, as gray was becoming the standard road-wear.

I suppose its because Phillies fans mosly remember him wearing #29.

Madson and Lee may someday encounter a "turn back the clock" day commemorating certain teams, such as the 2008 or 2009 World Series teams.  Would the Phillies give them the number people most remember, or the one that they wore at the time?

Victorino wore #18 for the 2007 Phillies to accommodate Wes Helms, but with World Series appearances soon thereafter, I'm sure we will forget about that as well.