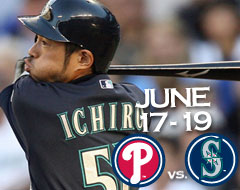 How the opposition rolls in-

Per Shannon Drayer on Twitter. Not sure why M’s would wait until they have a day off to promote him, but there you go – expect him to start at second base on Friday night. Luis Rodriguez was optioned to Tacoma to make room on the roster.
While I don’t think Ackley is going to come up and challenge for the batting title right away, I do think it’s reasonable to conclude that he is, right now, a better hitter than everyone on the roster except for Justin Smoak and Ichiro. I’m sure we’ll see him at the bottom of the order to begin with, but he has the skills to make a smooth transition to the big leagues, and adding him to this line-up can only help.
I’d expect something like .270/.350/.400 out of Ackley over the rest of the year, and while that might not sound like much, in this day and age, it’s a pretty nifty line out of a middle infielder. And given what else the Mariners are running out there right now, that makes him look like Barry Bonds.
Welcome to Seattle, Dustin. Stay awhile.

There's lots to talk about here. Friday's pitching match-up is something else. The old vet vs. the young buck. Saturday, we throw our up and comer against a Cy Young. Sunday, we throw a candidate for the hottest pitcher in the game against one of those guys the Phillies seem to never hit (the guy who's name escapes you always shuts us down). Additionally, the Phillies head west without Romero. The Mariners bring up super-prospect Dustin Ackley. They sit a half game out of first, we have baseball's best record. Great series on paper.

I'd say on paper we win Sunday and they win Saturday, but that's not how baseball works. This is a really interesting series on paper, and the Phillies offense, which has been good lately, will be tested now. Throwing two aces of our own, and having a bit better offense than them (overall, I like our's more), I'll say: