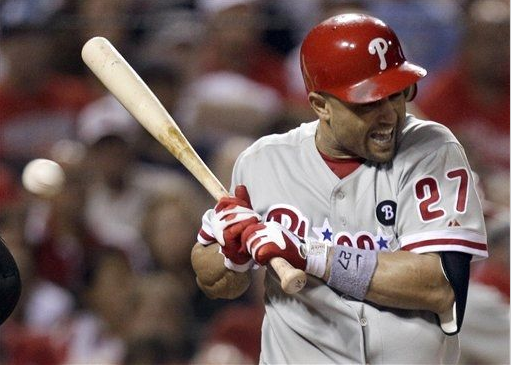 Following Monday's off day for the Phils, they started a three-game series in St. Louis, starting with Roy Halladay against Kyle McClellan. The Cardinals were quite obviously without Albert Pujols, and will be for the next 6-8 weeks. Whomp.

Speaking of the number six, that's how many scoreless innings McClellan pitched before giving up a game-tying single to Ross Gload in the seventh. The Cardinals had taken an early lead in the fourth when Ryan Theriot grounded into a force out to score Yadier Molina.

Roy Halladay pitched a brilliant six innings allowing one earned run on four hits, walking two (first inning) and striking out five. He earned a no-decision on what could have been his tenth win of the season. He would have been the first starter in the majors this season to accomplish that feat.

With Michael Stutes on in the seventh, Skip Schumaker popped up a sacrifice fly to Shane Victorino in center field to score Daniel Descalso from third. Cardinals took a 2-1 lead.

Victorino singled, Chase Utley drew a walk, and Ryan Howard was hit by a pitch in the eighth inning before Placido Polanco took a pitch to the hand to tie the game at two a piece. Polanco was removed from the game after the athletic coach checked his hand, and he was then replaced by Wilson Valdez.  Ben Francisco replaced Domonic Brown, and singled to score Chase Utley with the bases loaded to give the Phillies a 3-2 lead. Carlos Ruiz who was 3 for 3 in this game drew a walk against the fourth pitcher that Tony LaRussa used in the inning. Michael Martinez also drew a walk to push the Phillies' lead to 5-2. Jimmy Rollins smacked a single up the middle to bust this game wide open with a 7-2 lead. In comes pitcher number five with two outs, and Shane Victorino drew a walk to load up the bases. Chase Utley, the twelfth Phillie to come to the plate in this inning, delivered a single to left field to score two. Ryan Howard singled up the middle (this is getting tiring) to score Shane from second. 10-2 Phillies. The inning finally ended on Wilson Valdez's fly out to center. My goodness, what an inning, it lasted 43 minutes.

Young, filthy Antonio Bastardo came in for the bottom of the eighth. He walked one but retired the side without allowing nine runs to score. Take notes, Cardinals bullpen.

David Herndon closed it out protecting the 10-2 lead, and the Phillies took game one of the series. Michael Stutes took the win. Tomorrow, Cliff Lee will square off against Kyle Lohse at 8:15.