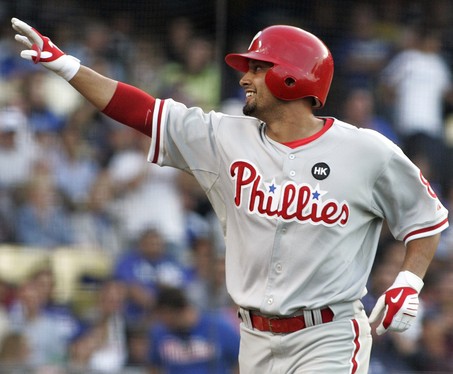 Welcome back Shane Victorino! Phillies finally had their 2011 Opening Day lineup for the first time this season, but managed one run, losing 2-1 in 12 innings to the Pirates.

Cole Hamels. No Words. He pitched eight innings with one hit, one earned, three walks and four strikeouts on 98 pitches (58 strikes). And he even out-hit the Pirates as he went 2-for-3.

Let's get to the offense storyline. Phillies scored first in the top of the 6th inning. Jimmy Rollins singled, then stole second. He appeared to be out on the play, but umpire Angel called him stafe. But I guess we can take it, right? Then the only run for the Phillies came off the bat of Chase Utley as Rollins scored from second. Phillies take the lead 1-0.

But doomsday happened in the bottom half of the 6th inning. Pirates SS Ronny Cedeno got on base via walk then advanced on second by a sac bunt. He moved to third on a wild pitch by Hamels and scored on a sac fly by Jose Tabata. Pirates tied the game at 1.

Not to much afterwards as Stutesy, Bastardo & Big Truck pitched scoreless innings.

Placido Polanco and Ryan Howard flashed some leather in the extra innings, but it could not help in the final inning. In the bottom of the 12th innning, Danys Baez was on the mound. Baez got the first two outs on a groundout and a strikeout. The Phillies fans were hoping he would get out of the inning quickly. But it did not go his way as Xavier Paul single up the middle, then stole second. Here comes, Jose Tabata hit the game winning single that scored Xavier Paul. Phillies fall to the eventual 2011 World Series (not) Pittsburgh Pirates, 2-1.

Better buckle up for Kyle Kendrick vs Clone Master Halladay, Charlie Morton in Game 2 of the series at 705pm.